Now, I know we're all (well, a lot of us) are starting to get a little bored of being bombarded with blog tours, which now seem to accompany every single YA release. I agree with you - I definitely think the same tried and tested format is beginning to get a little tired... Which is why I love this post so much and I really hope you'll love it too.

Antonia has written an absolutely brilliant account of how her book trailer was filmed - I had no idea of what went on behind the cameras as all we ever see is the shiny, finished product. This post is hilarious, it actually had me laughing out loud and now I'm even more excited to get cracking on my copy of The Storyteller. Please do take the time to read this one, I promise you'll enjoy it!

Without further ado, I'll hand you over to the lovely Antonia Michaelis:

Making of the Storyteller Trailer
… So we decided to produce a trailer for the Storyteller. The publisher prepared a budget – that roughly covers the costs of the lighting. So I sold some old fur coats and bars of gold and start writing something like a script.

Of course there´s a story in the Storyteller, a fairytale, and so we need a fairy tale scene.
And there´s a ship and the frozen Baltic sea and snow and a lot of blood … and all those things do exist somewhere, but not in the right place, that´s to say, in the studio.
Well, that´s what a green screen is for, says Harald, the director. That´s a green wall that used to be blue but is green now and will vanish. Huh – how does that work? 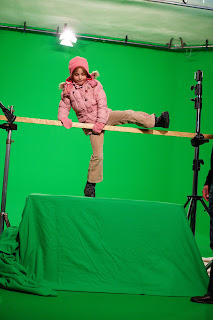 I collect my actors, two young people and a little girl, and try to reach the studio at Kotbusser Damm, Berlin. The taxi driver pulls up in front of a huge hotel and my inner eye sees polished, gold lined changing rooms … champagne in its cooler, waiting for the break … the director will probably appear in an evening gown … Then we realize it´s the wrong address. This is Kuhdamm, not Kotbusser Damm.

A little later, we´re at the real place: a grey back yard with a dirty stair case leading into a run down house, where we follow a crumpled cardboard sign to the small studio on the third floor. So much for glamour. 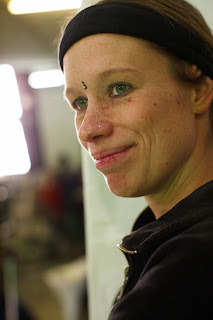 Half of the studio is painted a bright green indeed: the “infinity wall”, as we´re told. The floor seems to curve up to the wall, so no edge can be seen. But careful! The green curve between floor and wall is made of a thin membrane … and then they start measuring and re-measuring the distance between the actors, the wall, the camera ... multiplying numbers with the director´s shoe size to get … a number I don´t understand. 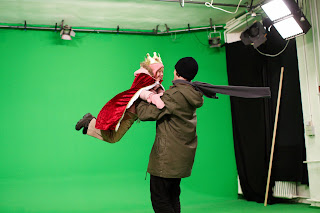 “Step back!” Harald, the director, calls out to Paul, our young actor. “Back, back – stoooooop!”
Too late, Paul already broke through the green membrane with his foot.
We start with the blood while the damage is being repaired.

The blood is supposed to drip on a bathroom floor and then be wiped away. I didn´t think that could be a problem. It is, though, because no shadows of anybody´s hands, arms, legs or noses are allowed in the picture. So the cameraman leans against the door, putting his left arm under his right leg to film while the guy wiping away the blood with his right hand is balancing on his left thumb, feet in the air … the camera´s weight is about 45 kg. 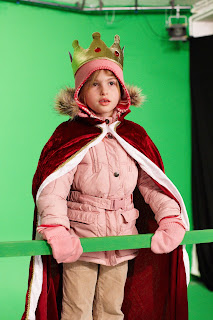 “Hold it steady!” Harald says. “Relax … and now the move over to the window … can you stop panting? That kind of gets on my nerves.”
The cameraman somehow manages to knot his neck and presses the buttons with his left ear.
I watch the drops of artificial blood fall to the floor. They have a diameter of about half a millimetre.
“Harald,” I say – and I always wanted to say this sentence - “we need MORE BLOOD.”
For a moment we think about amputating the cameraman´s leg, which is constantly getting in the way anyway, but strangely he won´t have it, and we decide to try 2-millimetre-drops.

Finally we get to the scene with the ship. The ship is about the size of a poodle, just a bit too small for our six year old actress Nelly. So we put little Nelly into the washing machine to make her shrink … No. The ship will be “cut in later”, as I learn. 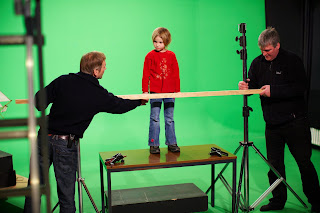 Nelly climbs onto a table covered in green cloth. From there she has to climb over a plank which will be the ship’s guard rail later and jump down “onto the ice”. All the time she must wear an old and ugly pinkish down jacket, a wool cap, gloves, a gown (to make her the little queen) AND a crown. The flood lights have heated the studio up to boiling point. Nelly climbs for the first test, climbs again, has her steps measured, her distance from the camera calculated, climbs once more … oops, says Harald. Now we forgot to paint the plank green so it can´t be seen later. So they paint the plank, dry the paint with a hair dryer, and here comes Nelly again, climbing… 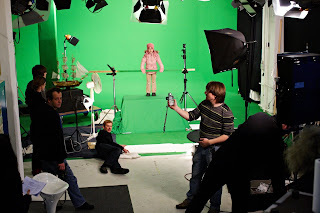 “Relax!” says Harald. “How come you look so sweaty?”
After her jump from “the ship”, Nelly has to run – and Paul has to catch her and whirl her around.
“Again! Whirl, whirl! Quicker!” shouts Harald.

After whirling around 15 times, all distances are measured anew to adjust the camera and the lights. Meanwhile, the actors are not allowed to get rid of any of their jackets, gloves or wool caps, because then the scenes couldn´t be cut together anymore. “And run! Run! And whirl! Quicker! Smile!” shouts Harald. And adds, in mild surprise: “You´re not dizzy, are you?”
Finally, Nelly sits on the floor and refuses to ever get up again. She looks determined. Harald carries her away.

In the last scene, Laura has to let the wind carry away some pages. Which wind? Well, we´ll take a fan .. but the pages stick to Laura`s hands and won´t cooperate. Harald brings the fan nearer. But the fan is not to be seen … neither is the hand holding it … we paint the fan green. We paint the cable green. We paint Harald green. And then we had the whole thing in the computer, just we couldn´t find the computer. We must have accidentally painted it green. 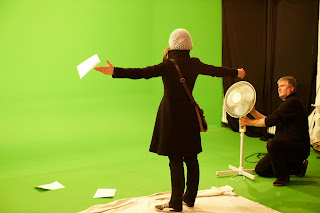 A little later I record the sound with some other people. Our little girl must sing standing in front of a strange piece of gnawed-looking wood. That is to make it not sound as if recorded in a big room, I´m told. But? Instead it will sound as if recorded in a hollow tree? I´m really tempted to paint the wood-thing green. Half of the musicians` repertoire we´re not allowed to use anyway, because we would have to ask the GEMA, which is the performing rights society here, first. The composers are all still alive.

“And if we´d see to it that they aren´t any more …?” I ask cautiously. No good, say the musicians, the composers have to be dead for at least 70 years to make their stuff GEMA-free. We take a long time choosing a GEMA-free piece of music, our sound-guy puts some silence in to create breaks and we send the whole thing to Harald.
“The music is crap”, he says. “But I do like the silence.”
Which presents us with another problem: is silence GEMA-free? Listening to the daily noise on the streets I´d say, yes, silence has definitely been dead for at least 70 years.

Dear reader! Should you happen to watch the trailer and buy the book, and should you not like it – just paint it green. That should make it go away. 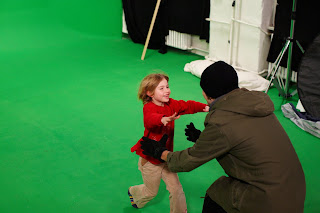