As I mentioned last week, I was lucky enough to be invited up to London to meet Philippa Gregory at the S&S offices for the reveal of the cover, title and summary of her first ever YA novel, Changeling. Changeling is the first in a four book series called The Order of Darkness and, trust me, it's going to be awesome. We were given a sampler of the book to read before we met Philippa and I can't wait to read more! I've been thinking about it non-stop since Tuesday.

I'll be posting a proper event write up soon but for now I'll just say it was definitely one of the highlights of my blogging life - Philippa is a true inspiration and I'm so honoured to have met her. I want to say an absolutely huge thank you to the amazing folks at S&S for arranging such a brilliant event.

For now I'll leave you with the press release for the series, issued by Simon and Schuster. 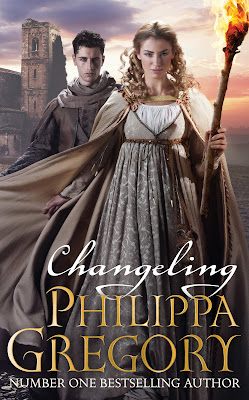 'In Changeling, the year is 1453 and all signs point to it being the end of the world. Accused of heresy and expelled from his monastery, handsome seventeen-year-old, Luca Vero, is recruited by a mysterious stranger to record the end of times across Europe. Commanded by sealed orders, Luca is sent to map the fears of Christendom, and travel to the very frontier of good and evil. Seventeen year-old Isolde, a Lady Abbess, is trapped in a nunnery to prevent her claiming her rich inheritance. As the nuns in her care are driven mad by strange visions, walking in their sleep and showing bleeding wounds, Luca is sent to investigate and driven to accuse Isolde. Outside in the yard he can see a pyre being made ready to burn the guilty…

The YA novels will receive a coordinated worldwide publication in the United Kingdom, the
United States, Canada, Australia and India, in tandem with Philippa’s adult fiction, and there
will be a comprehensive marketing and publicity campaign across both lists.

“I am delighted to move into a new area of writing,” said Philippa Gregory, “I know I have
many young adult readers already and it will be a pleasure to write a series especially for
them. Bringing history alive is a great joy and to bring it to a young generation doubly so.”

Ingrid Selberg said: “We are tremendously excited to welcome Philippa Gregory to the Simon
& Schuster Children’s list. Her magical storytelling, combined with romance and strong
characterisation, will have enormous appeal to the young adult audience. We look forward to
working with our colleagues across all of Simon & Schuster to bring her stories to young
readers worldwide.”'