Interview: Susanne Winnacker (The Other Life)

Hi guys - we're into February already, crazy! I've got Susanne Winnacker with me today, debut author of The Other Life, which was released yesterday (01/02/2012). It's published by Usborne and sounds like a truly unique dystopian - something we definitely need! 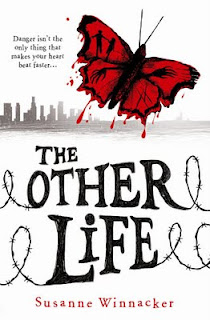 Hi, Susanne! In case any readers haven’t read the book yet, can you tell me a little bit about The Other Life?

THE OTHER LIFE is about Sherry who's lived with her family in a bunker for the last three years until they run out of food and are forced to leave the safety of their hiding place behind. Outside they find a destroyed and deserted L.A., and Weepers.

I'm a fast writer, so when I'm working on a book I usually aim for a daily wordcount of 2,500 – 3,000 words. On those days I pretty much spent the days on the sofa, laptop on my lap and music or tv in the background. I always have twitter open in a separate window – which is quite distracting but somehow I can't bring myself to close it.

I think it's important to give your characters flaws. If you make your protagonist too perfect, give them anything they want and don't throw obstacles in their path now and then, the reader won't be able to relate to them. Particularly new writers tend to turn their main character into Mary Sues. Most readers will only roll their eyes but certainly not sympathize with such a person.

Plotter all the way. I need a complete and detailed synopsis before I start writing a book. It drives me crazy if I don't have that. I tried to write without an outline/synopsis once and I got terribly stuck. Only after I wrote the synopsis was I able to keep writing!

Can you tell me a bit about your journey with The Other Life? When did you first come up with the idea and what were the timescales involved between the first draft and the novel being accepted for publication?

I came up with the idea for THE OTHER LIFE in January 2010. I wrote the first draft in four weeks, then I revised for a while and I started querying in the last week of March, found an agent in August and sold THE OTHER LIFE in October 2010.

I think it's very important, especially for me personally. Since I live in Germany, the internet is the best way to connect with fellow writers and readers. The support of the online YA community is great and I don't think I'd have gotten as far without it. Of course it's also a great way of procrastination, so without a bit of discipline you can lose lots of time online!

I'm impatient and I rush things. While that doesn't pose a problem when I'm writing the first draft, it can become one during revisions. It's an advantage to be able to complete a first draft in 4 – 8 weeks but when I start editing, I have to remind myself constantly to take my time.

I'm all for freedom. There's so much teens are confronted with in daily life and books are a good way to show them how to deal with certain things. I read Dean Koontz, Stephen King and other adult books when I was eleven and they didn't influence me negatively in any way. Just because those books dealt with sex, drugs, alcohol or violence didn't make me want to experience any of those things. I think as adults we should put more trust in teens. And as parents we should take the time to discuss books and taboo subjects with our children if they're unsure about how to deal with certain topics. But I'm against banning a teen from reading a book. That won't change a thing.

That list would be very very long. So many great books come out in 2012 (check out the Apocalypsies blog!). But I'll try to name just a few:
INCARNATE by Jodi Meadows. I had the pleasure of reading the ARC. A unique book with dragons, sylph and laser pistols!
CINDER by Marissa Meyer. I haven't read the book yet (only the first chapter and that was WOW) but an ARC is on its way to me. It's basically Cinderella with Cyborgs! Sounds awesome, doesn't it?
BUTTER by Erin Lange. I don't read many contemporaries but this book is at the top of my wishlist. It's about a boy “Butter” who's going to eat himself to death live on the internet.
SLIDE by Jill Hathaway. A thriller about a girl who can slide into other people and witnesses a murder! I had the pleasure of beta reading this book and it was fabulous!
And last but not least: MYSTIQUE by my fabulous crit partner Shari Arnold. A book about resurrection. I loved it and I'm sure you will too!

I love to cook. Preferably Thai, Chinese, Italian and Indian. I'm a bit of a food snob. I don't allow any kind of convenience food in my kitchen! I also love to spend time with my pets ( 3 bunnies and a dog that looks like a sheep) and my husband. We travel a lot and love to eat in nice restaurants.

Thank you so much for your time, Susanne. Before you go, could you tell me about any projects you have in the pipeline we can look out for?

Well, I finished THE LIFE BEYOND, the sequel to THE OTHER LIFE a few weeks ago. I've also been working on something new, a YA thriller. Sadly I can't reveal more yet!
Posted by CarlyB at 07:00