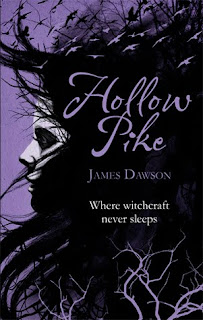 Summary (from Goodreads): Something wicked this way comes... She thought she'd be safe in the country, but you can't escape your own nightmares, and Lis London dreams repeatedly that someone is trying to kill her. Lis thinks she's being paranoid - after all who would want to murder her? She doesn't believe in the local legends of witchcraft. She doesn't believe that anything bad will really happen to her. You never do, do you? Not until you're alone in the woods, after dark - and a twig snaps... Hollow Pike - where witchcraft never sleeps.

My review: Well, well, well. What to say about Hollow Pike that hasn't been said already? If you've spent any length of time browsing YA blogs over the past couple of weeks you're bound to have seen a shed load of reviews about James Dawson's debut novel. Every single one I've come across has been positive and, this time, a novel really does deserve the hype it's been getting.

Hollow Pike is pretty much the 2012 equivalent of Long Lankin for me. You all know the saga of Long Lankin and myself, right? How I lusted after it every single day for six months, devoured it and absolutely fell in love? Well, it's the same story with Hollow Pike. I heard about it at the Indigo launch back in 2011 and waited with bated breath for a copy to arrive. When it finally clattered through my letterbox I promptly whizzed through the story in a couple of hours and was completely, utterly blown away. The fact this is a debut novel is even more impressive and proves that James Dawson is a huge name to look out for in YA fiction.

Hollow Pike is a tale about mystery, about growing up, first love, facing your fears and, above all else, friendship. Some of the elements of the story may be paranormal but that doesn't take away from the fact this is a novel every single teenage reader is going to be able to relate to.

One of the main issues Hollow Pike deals with is bullying and I think it's the way Dawson deals with this issue that makes this book such a huge hit. It's so easy to make stories about bullying come off a bit preachy and fake but I didn't question anything that was said or done by any of the characters. The bullying that takes place in Hollow Pike is absolutely a textbook example of how bullying can wear a person down, whether it's physical or emotional, it all has an effect on the victim. We see characters being bullied for how they look, their sexuality, or simply because they're attracted to the wrong guy. I can't praise Dawson enough for handling such a serious issue so well, by weaving it seamlessly into the main plot and never coming off as preachy.

Besides the bullying, the love story and the fact Lis can't fall asleep at night without being plagued by horrific nightmares, Hollow Pike also has a murder mystery to keep us entertained. As usual, I suspected every single character in the book, was convinced I'd rumbled the murderer and, naturally, got it all completely wrong. Dawson kept me guessing until the last moment and even then the outcome still wasn't anything I could have imagined. Just wonderful.

In short, the teenage voices are great, I adored Kitty and Delilah, Jack is totally hot and don't even get me started on Danny (in a good way, trust me, folks). There are some genuine laugh out loud moments in Hollow Pike (eye condoms, ahoy), enough pop culture references to keep even me happy and a brilliant little scene that just goes to show that wherever in the country you're from, inviting someone over to 'watch a DVD' is exactly the same dirty old code for, well, you know.

First line: 'Lis knew she was dreaming, although this brought little comfort as the blood ran over her face.'