Review: The Pirates! In an Adventure with Scientists - Gideon Defoe 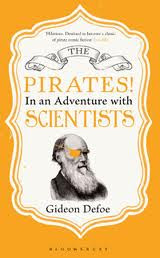 Summary (from Goodreads): Not since "Moby-Dick,.".No, not since "Treasure Island,.".Actually, not since Jonah and the Whale has there been a sea saga to rival "The Pirates In an Adventure with Scientists," featuring the greatest sea-faring hero of all time, the immortal Pirate Captain, who, although he lives for months at a time at sea, somehow manages to keep his beard silky and in good condition.Worried that his pirates are growing bored with a life of winking at pretty native ladies and trying to stick enough jellyfish together to make a bouncy castle, the Pirate Captain decides it's high time to spearhead an adventure.While searching for some major pirate booty, he mistakenly attacks the young Charles Darwin's Beagle and then leads his ragtag crew from the exotic Galapagos Islands to the fog-filled streets of Victorian London. There they encounter grisly murder, vanishing ladies, radioactive elephants, and the Holy Ghost himself. And that's not even the half of it.
My review: When a copy of The Pirates!... dropped through my door a couple of weeks ago I had no idea what to expect. I'd never heard of the book before and wasn't convinced I'd enjoy it, though I instantly loved the cover. I decided to give this one a go after I heard the news it's been turned into a film by Aardman Animations, due out next month.

Who doesn't love a good adventure story? The pirates in this series are absolute classics, playing into all the pirate stereotypes we've come to know and love over the years. Think parrots, peg legs and surly dispositions and you're not too far off. The Pirates!... is pure slapstick humour and very, very British, brilliant entertaining and always hilarious. It's a quick little read that doesn't demand too much attention, just perfect to delve in and out of when you want a fun book that isn't too taxing.

I'm sure that film adaptation is going to be great. It's such a visual book and the descriptions of the pirates, the open sea and the action scenes mean there's so much potential for some really great moments on the big screen. I'm really excited to catch this one when it comes out, especially taking into the account the team who are behind it - have Aardman ever made anything less than stellar?

First line: '"The best bit about being a pirate," said the pirate with gout, "is the looting."'

Labels: Gideon Defoe, Review, The Pirates In an Adventure with Scientists