Due to be released on November 13th 2012, Lauren Morrill's Meant to Be has just had its cover revealed (well, a few days ago) and it's a beaut! I'll definitely be picking this one up when it's released later this year; the story sounds so much fun and I think the cover will definitely help this one fly off the shelves. Sorbet colours, Big Ben and potential sexytimes - what's not to love about this cover? 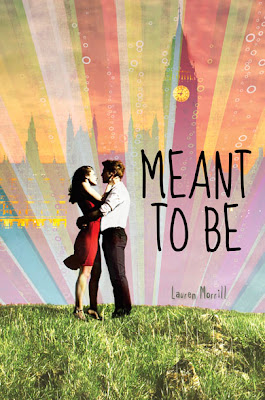 Summary (from Goodreads): It's one thing to fall head over heels into a puddle of hazelnut coffee, and quite another to fall for - gasp - the wrong guy. Straight-A junior Julia may be accident prone, but she's the queen of following rules and being prepared. That's why she keeps a pencil sharpener in her purse and a pocket Shakespeare in her ... well, pocket. Julia also believes in fate, and that Mark, her childhood crush, is her MTB - her meant-to-be.

But this spring break, Julia's rules are about to get defenestrated (SAT word: thrown from a window) when she's partnered with her personal nemesis, class clown Jason, on a school trip to London. After one wild party, Julia starts receiving romantic texts ... from an unknown number! Jason promises to help discover the identity of her mysterious new suitor if she agrees to live a little along the way. And thus begins a wild-good chase through London, leading Julia closer and closer to the biggest surprise of all: true love.

Because sometimes the things you least expect are the most meant to be.
Posted by CarlyB at 07:00