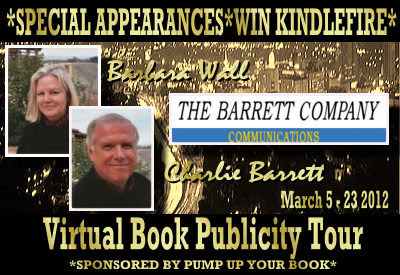 Charlie’s author clients have include LA author-screenwriter Carla Malden, author of Afterimage, Kindle’s John Locke/Lethal People, Julie Sinatra/Under my Skin, Warren Adler/War of the Roses, David R. Fett MD and Steve Langford/White Sleeper, Deby Eisenberg/Pictures of the Past, Marty Jurow/See’in Stars: A Show Biz Odyssey, actor George Kennedy/Trust Me, Peter Ford/Glenn Ford: A Life and Dr. Ken Nedd/Power Over Stress as well as many, many others.

Mr. Barrett started up The Barrett Company publicity firm after serving in top PR positions with the National Broadcasting Company (NBC) for more than ten years, where he was in charge of media relations for Johnny Carson’s Tonight Show and Today, among other well-known NBC shows such as Unsolved Mysteries, Fame and numerous highly-rated NBC specials, including The American Film Institute Awards and The American Movie Awards.

When earlier basing in New York City, Mr. Barrett served as a book publicist to many major publishers with publicity campaigns for a number of best-selling authors from large trade book publishers from Scribners to Random House.

Mr. Barrett has also held executive media relations posts with 20th Century Fox Film Corporation in New York and Capitol Records in Hollywood, New York and London, where he helped launch recorded music by The Beatles, The Band and many other music artists including Joe South, Freda Payne, Bobbie Gentry and Glen Campbell.

About The Barrett Company:

The Barrett Company also assists attorneys and their clients, managing media coverage in civil and criminal cases from California to New York in both state and federal courts.

Mr. Barrett formed the firm after serving in top public relations positions with the National Broadcasting Company (NBC) for more than ten years, where he was in charge of media relations for The Tonight Show and Today, among other well-known NBC shows such as Unsolved Mysteries, Fame and numerous highly-rated NBC specials, including The American Film Institute Awards and The American Movie Awards.

Mr. Barrett has also held executive media relations posts with 20th Century Fox Film Corporation in New York and Capitol Records in Hollywood, New York and London, where he helped launch recorded music by The Beatles, The Band and many other music artists.

Charles Barrett began his media career as a reporter with The Associated Press in New Haven, CT and later served on the editorial staffs of both The Hollywood Reporter in Los Angeles and Billboard Publications in New York. He has also authored numerous articles for magazines and newspapers on the performing arts and travel as well as appearing as a contributor on major U.S. radio talk shows discussing celebrities, films, television and books. He was voted the Book Publicist of the Year award by the Southern California Book Pub Society recently. Charles is a member of The Publishers Association of Los Angeles, The Academy of TV Arts and Sciences (Emmy Award) and the Academy of Motion Picture Arts & Sciences (The Oscars ®).

The Barrett Company is well known and regarded among the world’s media outlets for its credibility and creativity. Through years of client assignments we have developed remarkable and successful campaigns for our wide range of authors/publishers, Hollywood creatives, companies and celebrities, which have paved the way for us to produce media, consumer and trade events of all descriptions both in the United States and overseas, from Book Expo to NATPE (the renowned annual television program executive conference) to Los Angeles Times Festival of Books, The Frankfurt Book Fair to filmdom’s Show West as well as MIP in France, The Beverly Hills Film Festival and The Cannes International Film Festival.

TBC’s experience, skills and knowledge in various professional disciplines have enabled the company to offer programs we are proud of, including trade and consumer publicity campaigns, Internet publicity campaigns, crisis communications management, new company and celebrity launches, trade show media awareness, marketing communications solutions, and consultancy to in-house publicity firms in publishing, film and television. No assignment is too big or too small. TBC possesses a keen awareness of the workings of the global media – - including but not limited to print, broadcast and digital – - and has demonstrated over the years the ability to create stunning and effective media outreach models for valued clients, be they well established, or start-ups, or beginning careers as authors and celebrities.

Barbara Wall, a specialist in media marketing and media research, serves as Vice President of TBC. She has accomplished extensive assignments, ranging from technology to entertainment to printing/publishing and has working relationships with a wide circle of book media contacts including reviewers at major US newspapers to Internet book reviewers including NY Times, USA TODAY, Midwest Book Review, BookPleasures.com, BookReview.com, writers at select men and women’s’ magazines and online social media bloggers covering authors and publishers. Ms. Wall formerly served as an executive in two Fortune 500 companies (Xerox, Experian) and has worked with a range of clients including BMG Music Service, The Fox Network, Eddie Bauer, Levi’s, Starbucks, and Jamba Juice. She holds both BA and MBA degrees and formerly taught high school English in Colorado.

A key professional on The Barrett Company team is Vice President John Michaeli, who offers international and domestic public relations/communications expertise with a proven track record of developing, implementing and directing strategic marketing campaigns. Mr. Michaeli is a crisis communications specialist, having served many studios and networks dealing with a range of public issues in both personnel to products areas. Mr. Michaeli has held senior management posts with PR agencies and companies in the entertainment, technology, new media, network TV and public relations industries, including Walt Disney Studios, Fox Family Channel, Warner Brothers, Pax TV and Hanna-Barbera, the renowned animation studio in Hollywood where he served as VP of Marketing.

Representing TBC in New York is publicist and author Ward Morehouse III, who served as media contact at NBC for NBC Nightly News and was also was a Vice President at Jack Raymond & Associates, a top New York public relations firm. Mr. Morehouse has authored several books on the world’s top hotels from The Plaza to The Waldorf Astoria and most recently released his latest book, London’s Grand Hotels. He also created and maintains the New York City web portal www.broadwayafterdark.com.

TBC is proud of its association with renowned film marketing professional Jerry Pam. Mr. Pam’s accomplished film marketing career ranges from his days with The Beatles on their hit films, A Hard Day’s Night and Help, to films like Chocolat, Cinema Paridiso, Cider House Rules, the Oscar ® winner Shakespeare in Love and Good Will Hunting, among many, many other pictures. He earlier created remarkable film marketing campaigns for Apocalypse Now, Last Tango in Paris, American Graffiti, The Conversation and Midnight Express. Jerry has represented numerous screen and television personalities, including Michael Caine, Roger Moore, Jaclyn Smith and Robert Stack, in addition to well known authors such as Sidney Sheldon, Jackie Collins, Judith Krantz and Morris West. His corporate clients have ranged from Rolls Royce to Mouton Cadet Wines, and Faberge to General Mills.

The Barrett Company represents author Carla Malden (who co-wrote her father Karl Malden’s biography When Do I Start?) for her forthcoming book Afterimage from Globe Pequot Press. TBC created the media marketing campaign for film producer/agent Marty Jurow (Breakfast At Tiffany’s, The Pink Panther and Terms of Endearment) and his tales of Hollywood’s Golden Age — Marty Jurow Seein’ Stars: A Show Biz Odyssey, a hardbound work published by Southern Methodist University Press. In his book, Mr. Jurow tells riveting vignettes and stories about Jack Lemmon, Karl Malden, Frank Sinatra, Ava Gardner, Audrey Hepburn, Marlon Brando, author Truman Capote, Katharine Hepburn, Elvis Presley and Gary Cooper, among others. Mr. Malden said about the book, “Anyone who wants to know what happened behind the scenes in theatre, film, and TV during the 30s, 40s and 50s must read this book.” Other author clients include Julie Sinatra author of Under My Skin, entrepreneur Gary Fong’s The Accidental Millionaire and Do You Really Need Back Surgery by noted Santa Monica neurosurgeon Dr. Aaron Filler to Before You Say I Do Again by California family law and divorce expert attorney Ben Berkley.

Our notable TBC television projects include campaigns for reality-based TV productions such as Oprah Winfrey’s Oprah’s Big Give on ABC and CBS’ The Amazing Race to shows on American Movie Classics (Mad Men) to Bravo’s Millionaire Matchmaker to NBC’s Unsolved Mysteries to Paramount TV’s Wild Things to Fox TV’s Cops and numerous other productions. We also launched the success of Ed McMahon’s Star Search at Walt Disney World in 1995. Our PR campaigns for various television productions resulted in across-the-board media attention and awareness in a wide range of outlets from USA Today to the New York Times as well as The Wall Street Journal, Daily Variety, The Hollywood Reporter, Multi Channel News, Entertainment Tonight, Access Hollywood, E! TV, Today, Good Morning America and The Tonight Show just to mention a few.

Pump Up Your Book and The Barrett Company are teaming up to give you a chance to win a Kindle Fire!

Here’s how it works:

Each person will enter this giveaway by liking, following, subscribing and tweeting about this giveaway through the Rafflecopter form below:

The Kindle Fire promotion will run March 5 – 23, 2012. Winner will be chosen randomly by Rafflecopter, contacted by email and announced on March 24, 2012.

To find out who else is participating and more chances to win, visit http://www.pumpupyourbook.com/2012/02/09/the-barrett-company-hollywood-virtual-book-publicity-tour-march-2012-kindle-fire-giveaway/.

Contest is only open to U.S. and Canada residents.