Morning all! How are you doing? I hope you're all having a lovely week and reading a brilliant book that you can't get enough of.

I've got the brilliant Cole Gibsen with me today, whose YA novel, Katana, is due out on March 8th in the US - but never fear, non-US residents (like me!), we can snap Katana up on Amazon or The Book Depository, complete with free delivery. Bargain. Bargain, indeed.

Anyway, I love this interview, I really do. It's always so great to hear about the writing process and the person behind the words so it was fantastic getting to know Cole through this interview. I just want to say a massive thanks (again!) to her for such an insightful interview - Cole, you rock! 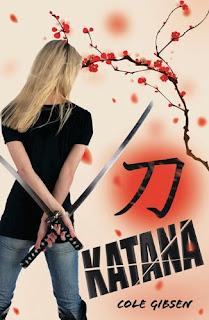 Hi, Cole! In case any readers haven’t heard about the book yet, can you tell me a little bit about Katana?

Sure! KATANA is the story of a seventeen year old girl who, after being mugged in the mall parking lot, finds herself possessed by the spirit of a fifteenth century samurai warrior.

My daughter goes to preschool from 8:00 A.M. to 10:30 A.M. That’s usually the only time a day I have to write. So I really have to force myself to buckle down, not get distracted by the various sparkles on the internet, and get down at least 1500 words. Some days I do this…some days I don’t. I’m an emotional writer, so if I’m feeling down or stressed, my word counts stay pretty low.

There was a time, when I was a teenager, that I literally lived out of my 1985 VW Jetta, and my only entertainment was the books I checked out from the library. My goal, when creating the MC from KATANA, was to create a character that could make teen me forget about living in a car and maybe even laugh a time or two.
What sort of research did you have to do for Katana? How did you go about doing this?

I would give my right arm to go to Japan. But until limbs become an acceptable form of payment, I had to rely solely on research. I must have sifted through a hundred books on Japanese history and watched 4-5 documentaries on samurai. While everything I read was fascinating, I’m sure it’s no substitute for visiting the actual country. Someday…

The YA book market is a competitive place, what do you think sets Katana apart from the pack?
When I was querying agents, I remember reading on my agent’s (Christ Richman of Upstart Crow) website that he was looking for a YA fantasy that didn’t take itself too seriously. And I thought, “That’s me!” Recently, a reviewer described KATANA as a “popcorn read” and I thought that was the perfect description. My goal when writing KATANA was to write a humorous book that would give a teen reader the opportunity to forget about the drama of real life for just a little while. If they have a couple of laughs at the same time, all the better.

I definitely love to listen to music as I write. It’s funny, my road to publication was a loooooooong one. I think I finished the first draft of KATANA in ’08? Or maybe it was ’07? Crazy. Back then I think my playlist was mostly Missy Higgins and All American Rejects. Nowadays I love me some obscure tragic indie music. I have a Pandora station that keeps plied and happily sated with depressing “never going to find happiness again” music. The muse wants what the muse wants.
Are you a plotter or a pantser? Have you always been this way?

I definitely wrote KATANA by the seat of my pants. Since then, I’ve transformed into a plotter. Now the thought of sitting down to write without a synopsis on hand gives me the chills.
Can you tell me a bit about your journey with Katana? When did you first come up with the idea and what were the timescales involved between the first draft and the novel being accepted for publication?

Oh ,wow. Like I said, I wrote the first draft of KATANA in ’07 or ’08 (I can’t believe I can’t remember-lol). I didn’t initially seek out publication because I honestly didn’t believe that, as a person without a college background in writing, had a chance of getting her book published.

But then the economy fell apart and my business went under. I was left trying to figure out what I was supposed to do with my life now that I didn’t have a job and the one thing that kept popping in my mind that I really wanted to do was be a writer. So I thought, “What the hell!” and I pulled

KATANA out of the drawer and cleaned it up. Meanwhile, I queried another novel only to be met with a year’s worth of rejection. After realizing that novel was going nowhere, I sent KATANA out to agents and after three months I had my first offer. The road to publication took another year.

KATANA had a lot of close calls. 7 times the reading editor loved it, but couldn’t get their house’s acquisition team on board. So after another round of revisions with my agent, we sent KATANA back out and after only a couple of weeks, received our first offer.
How important do you think social media (i.e. Twitter/Facebook/blogging) is in today’s market for a writer?
Oh, gosh. I definitely think it’s important to make yourself available, but at the same time I think the most important thing writers can do for their career is, well, write.

I struggle with depression. So when I have black days or weeks, I withdrew inside of a shell where I won’t want to answer emails, or log onto Twitter/Facebook, or worse case scenario, even write. I just want to sit in a corner and be sad. Unfortunately, this is just part of who I am and I’ve accepted.

Not to mention my family is amazingly supportive. When I have those days, I still make myself read so I’m doing something to improve my craft. And I’ve learned to work that much harder during my good days.

You know, I’ve never been one to obsess over character names. In fact, I think a good 60% of my character names are generated from online name generators. I spend more time agonizing over voice.

What did you hope to accomplish by writing Katana? Do you think you have accomplished what you set out to do?

See question 4.
Do you think your teenage years have influenced you as a writer? If so, how?

I’ve never met my real dad. My stepdad was not a nice man, he kicked me out of the house at seventeen and set fire to all of my belongings. I finished the last couple weeks of my senior year by living out of my car and staying with friends. Starting college, I also waited tables full-time at a Cracker Barrel and lived with a stripper.

I’ve been told that I should write a contemporary about my real-life experience. I get that. But when I was a teen, the last thing I wanted to read about was more real life drama. I had enough of my own. I read fantasy as a way to escape from real life. By writing fantasy now, in a way I feel like I’m paying it forward to all of the authors who helped me cope. Though, I may or may not be able to confirm that a strictly fictional character who may or may not have been inspired by The Stepdad makes an appearance in my forthcoming novel, BREATHLESS.

There is a lot of argument within the young adult market as to what is appropriate for teens to read. Where do you stand on this matter? Do you think teens should be protected from reading about taboo subjects or do you think they should have the freedom to choose their own reads?
I understand that my family values may not be the same as yours. With that said, I think it’s important for families to decide what’s appropriate for their children to read, not the schools, libraries, or government. With that said, I think edgy books provide an opportunity for families to come together to read, learn, and discuss together.

It’s the year of the Apocalypsies! There are so many great books coming out by so many fabulous debut authors—too many to mention!
Aside from writing, how do you like to spend your free time?

I love to sew. I can be found in front of my sewing machine creating outlandish costumes for the fun of it, dresses for my daughter, or piecing together quilts.

Thank you so much for your time, Cole. Before you go, could you tell me about any projects you have in the pipeline we can look out for?

I have a paranormal mermaid romance, BREATHLESS, coming out this spring with Crescent Moon Press. I recently finished writing KATANA’s sequel so now it’s on to a shiny new project that may or may not have been inspired by a recent game of D&D with my husband and his friends. *grin* 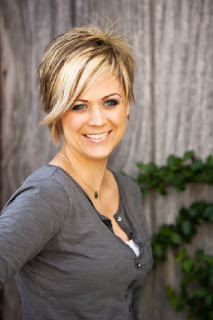