Hi everybody - I'm here today with an interview with debut author Elisa Ludwig. Her first novel, Pretty Crooked, is due out on March 13th in the US but if you're based in the UK (like me!) you can order this one through Amazon or The Book Depository if you need to get your hands on it.

Pretty Crooked sounds like a really fun book and it's great to see so much more contemporary being released this year. I'm a fan of retellings and this one is a reimagining of Robin Hood, so I'm really excited about it.

Anyway, without further ado I'll hand over to Elisa. 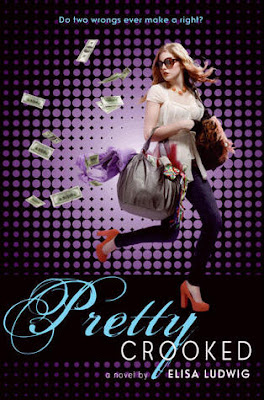 Hi, Elisa! In case any readers haven’t read the book yet, can you tell me a little bit about Pretty Crooked?

Hi, Carly. Thanks so much for having me! Pretty Crooked is the story of Willa Fox, a girl who moves to a new town and falls in with the glamorous wealthy girls at her high school Valley Prep. Only later does she realize that these friends of hers are actually bullies and they’re tormenting the scholarship kids. In order to level the playing field, she takes the law into her own hands and tries to, shall we say, redistribute the wealth. In the meantime one of Prep’s hottest but most arrogant guys seems to be taking an interest in Willa, and she’s finding his attention just a tad distracting.

Generally, when I’m writing the first draft, I try to get through two or three chapters a week. No set word limit, but I know that my chapters are usually around 10 to 12 pages. When I’m working on later drafts the goals are more like “fix this hideous character problem on Monday,” “sort out the plot mess on page 22 on Tuesday” and that sort of thing.

Main characters should be insightful and perceptive so that you learn something from seeing the world through their eyes, but they also need to have some flaws—otherwise, they’re kind of boring.

What sort of research did you have to do for Pretty Crooked? How did you go about doing this?

Oh, I had to do a lot of research about stealing—pickpocketing, breaking into houses, breaking into cars. Hopefully my Google search words won’t tip off the FBI, though if they did I’d probably look like a pretty clueless criminal. But yes, I did most of this research online.

The YA book market is a competitive place, what do you think sets Pretty Crooked apart from the pack?

I think Pretty Crooked is unusual right now because it’s technically contemporary but it has a thriller/mystery edge to it. I’m not a marketing person, but it seems like it’s an underrepresented genre right now. Plus it’s fun and lighthearted but it also has some relevant themes about bullying and class issues.

I LOVE music but I usually don’t listen to much until I’m well along in the process—maybe not until the final rounds of editing. It tends to distract me too much. But when I’ve been working on some edits lately I’ve been listening to atmospheric instrumental (or instrumental-ish) stuff like Juana Molina, Explosions in the Sky and Arthur Russell.

Total pantser by nature but I’m learning, painfully, to be a plotter, because having a detailed outline definitely makes the process easier and makes me slightly less batty.

Yes, for sure. Books were so important to me at that time of my life—it’s almost magical when I think about it now. So the fact that I was a big reader from an early age was hugely influential in turning me into a writer. Like a lot of teenagers, I felt somewhat alienated by mainstream culture at the time in general and the social universe of my high school in particular. When I write now, I try to tap into those feelings and write books I would have wanted to read at that age. And always, there’s that teen voice in my head that never really went away, so that’s helpful.

I was lucky enough to go to school and visit libraries in a place where nothing was censored. I feel strongly that teens should read what interests them. Obviously, kids have different maturity levels and parents play some role in helping their kids figure this out. But “protection” is maybe only a couple degrees removed from censorship. I heard the writer Donna Jo Napoli speak about this recently and she said (much more eloquently) that children, especially privileged children, should be able to read about terrible things, because it makes them into empathetic people. When I think of the books I read as a kid, I realize I experienced a lot of awful but very real things I would have been sheltered from otherwise.

I’m a proud Apocalypsie so I’ll just say that there tons of fabulous 2012 debuts on the way. It’s an amazing group of authors and I’m so excited to see what happens next.

Thank you so much for your time, Elisa. Before you go, could you tell me about any projects you have in the pipeline we can look out for?

Pretty Sly, the sequel to Pretty Crooked, will be out in March 2013. I’m also working on a new manuscript which is still in the very early stages but that I hope will make its way into the world soon! 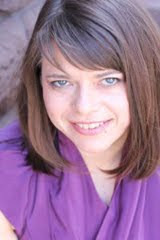 For more information about Pretty Crooked head over to the Goodreads page for the book by clicking here and if you want to learn more about Elisa Ludwig you can visit her website here.
Posted by CarlyB at 07:00