Hello chaps! I've got the lovely Eve Marie Mot here with me for an interview today. She's a debut YA author of A Breath of Eyre, a historical novel inspired by Jane Eyre, which is due out April 1st. 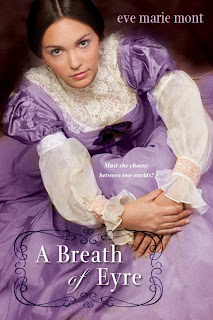 Hi, Eve! In case any readers haven’t read the book yet, can you tell me a little bit about A Breath of Eyre?

In 100 words or less: Emma Townsend has always believed in stories—the ones she reads voraciously and the ones she creates in her head. Perhaps it’s because she feels like an outsider at her exclusive prep school or because her stepmother doesn’t come close to filling the void left by her mother’s death. But escape soon arrives in a leather-bound copy of Jane Eyre. When a lightning strike catapults Emma into Jane’s body and her nineteenth-century world, Emma must decide whether her destiny lies in the pages of Jane’s story or in the unwritten chapters of her own.

I’ve heard it said time and again, but the two most important elements for a YA novel seem to be authenticity and voice. By authenticity, I mean that teens should feel immersed in a story and world and not feel they are being lectured or condescended to. I teach high school English, and teens can spot a phony a mile away. An author should write YA because they love all the possibilities the genre offers or they enjoy reliving those heightened moments of youth, not because it happens to be a hot genre. The other critical element for YA is voice, but voice is so elusive. Agents and editors often say, “I can’t define voice, but I know it when I see it.” Voice can encompass narrative personality, point of view, style—so many things! I know that when I’ve worked on projects in the past that haven’t worked, one of the main reasons is that I haven’t found the right voice to tell that story.

The YA book market is a competitive place. What do you think sets A Breath of Eyre apart from the pack?

Instead of a straight literary retelling, my book has the protagonist actually enter the world of Jane Eyre, causing a struggle over whether to change the outcome of the book and the outcome of her life. She’s also able to travel back and forth between Jane’s world and her own, which makes for some interesting dilemmas. I’m hoping what sets my book apart is the mash-up of genres: historical, retelling, contemporary, and a dash of magical realism.

I usually can’t write with music playing, but I’ll often play a song to get me inspired and tease out the ideas while the music’s on, then shut it off so I can do the actual writing. But the song will still be echoing in my head, and it definitely helps me set the right tone and mood for a scene. Those are the chapters that tend to be the most cinematic, which I love! For A Breath of Eyre, the bands that were most influential were Coldplay, Thirteen Senses, Barcelona, and Embrace. Embrace’s “Gravity” became sort of the unofficial love theme of the book. You can listen to the entire playlist on my website.

What did you hope to accomplish by writing A Breath of Eyre? Do you think you have accomplished what you set out to do?

Really, I wrote the book for me. I’ve always wanted to live in the world of Jane Eyre, so I created a character who could. I wasn’t setting out with any agenda, but now that the book is finished, I hope readers see it as a respectful and worthy tribute to a beloved novel. I also hope readers enjoy a few hours of fun, escapism, and romance. If it makes them want to read Jane Eyre, so much the better!

Definitely. I was kind of a shy, cautious kid in high school. I played sports and did well in school and was altogether normal. But I secretly envied my best friend who hung out in the art room with the kids who sported tattoos, Doc Martens, and asymmetrical hair. I always felt like I floated in the margins, never really belonged to a particular clique. Consequently, I felt lonely a lot of the time, but this became my strength because it allowed me to observe and save up all kinds of great details for later. Now I get to re-envision those adolescent years, and my characters can try things I was too scared to try, date boys I never had the nerve to talk to, and live adventures I only got to experience in books. Writing YA is so much fun! (Except when it’s not. But that’s another topic…)

Wow, there are SO many books I’m looking forward to. I belong to the Class of 2k12 and the Apocalypsies, groups of debut authors with releases coming out in 2012. I am so anxious to read all of their books, even though I know it’s impossible. In terms of standouts, I am dying to read Katherine Longshore’s Gilt and AC Gaughen’s Scarlet (historicals), Heather Anastasiu’s Glitch and Kristen Simmons’s Article 5 (dysopians), and I have to give a shout-out to another Jane Eyre-inspired book, Tina Connolley’s Ironskin, a steampunk retelling with fairies—awesome!

Thank you so much for your time, Eve. Before you go, could you tell me about any projects you have in the pipeline we can look out for?

A Breath of Eyre is the first in a trilogy so the next book will be A Touch of Scarlet, inspired by The Scarlet Letter (lots of secrets and scandal), and the third book is A Phantom Enchantment, set in Paris and inspired by The Phantom of the Opera!

Thanks so much for the great interview, Carly!

*
Brilliant - I'm so excited about this one, I can't wait for my pre-order to be dispatched!

For more information about Eve and A Breath of Eyre take a look at the following links: