Hi everybody - I'm here today with a fab interview with Jill Hathaway, a 2012 debut author (yay for debuts - confetti, joy etc). Her first novel 'Slide' is due out March 27th 2012 and I'm really excited about this one - I pre-ordered it on Amazon back in September 2011!

Without further ado I'll hand over to Jill. 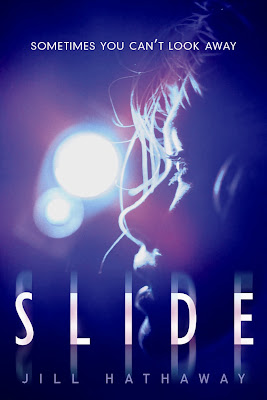 Hi, Jill! In case any readers haven’t read the book yet, can you tell me a little bit about Slide?

Vee Bell is certain of one irrefutable truth—her sister’s friend Sophie didn’t kill herself. She was murdered.

Vee knows this because she was there. Everyone believes Vee is narcoleptic, but she doesn’t actually fall asleep during these episodes: When she passes out, she slides into somebody else’s mind and experiences the world through that person’s eyes. She’s slid into her sister as she cheated on a math test, into a teacher sneaking a drink before class. She learned the worst about a supposed “friend” when she slid into her during a school dance. But nothing could have prepared Vee for what happens one October night when she slides into the mind of someone holding a bloody knife, standing over Sophie’s slashed body.

Vee desperately wishes she could share her secret, but who would believe her? It sounds so crazy that she can’t bring herself to tell her best friend, Rollins, let alone the police. Even if she could confide in Rollins, he has been acting off lately, more distant, especially now that she’s been spending more time with Zane.

Enmeshed in a terrifying web of secrets, lies, and danger and with no one to turn to, Vee must find a way to unmask the killer before he or she strikes again.

Since I'm a high school English teacher, I write a lot during the summer. I have a small daughter, and my husband usually watches her in the morning so I can go to Panera or the library and write. I usually set a goal of about 2,500 words per day. Once I'm finished, I'm free to go do whatever--browse at Barnes & Noble, walk in the park, or get a burrito for lunch.

I rely a lot on the little details. The Green Day poster on Vee's wall. The black, chipped nail polish on Vee's fingers. The Sharpie marker that Rollins is always twirling. These tiny things, to me, are the most important because they can reveal a lot about a character by showing and not telling.

What sort of research did you have to do for Slide? How did you go about doing this?

I actually did quite a bit of research on narcolepsy that didn't make it into the book. I learned about these things called orexins that stimulate wakefulness. And I researched the drug that Vee is supposed to take to control her narcolepsy, Provigil. But the thing is, Vee doesn't really have narcolepsy. To the observer, it just APPEARS that Vee is falling asleep. What she actually has is much more complicated and can't really be explained by science.

The YA book market is a competitive place, what do you think sets Slide apart from the pack?

Because Vee is able to see through other people's eyes, Slide has a unique narrative style. It's written in first person, but I have more flexibility because Vee can slide into places and witness things she shouldn't be able to see. I know a couple of other books have come out recently where someone switches bodies with someone else, but Vee can get into virtually anyone's head. And therein lies the fun of the story.

I do like to listen to music while I'm writing! I listen to a lot of artists from the nineties. I just finished writing the rough draft of SLIDE 2, and I listened to "Everlong" by the Foo Fighters over and over.

I'm definitely more of a pantser, but I'm trying to be more of a plotter. I have to start actually writing to figure the story out. Then I go back and try to outline it so I can make the novel actually make sense during revisions.

Can you tell me a bit about your journey with Slide? When did you first come up with the idea and what were the timescales involved between the first draft and the novel being accepted for publication?

I came up with the basic premise of Slide in spring of 2010 when I was brainstorming concepts for a story I could write along with my creative writing class. I sent query letters out way too early and got some requests in May. In early June, I decided to work with Sarah Davies. She warned me I had a lot of work to do, but I was ready to dig deep and challenge myself as a writer. I revised all summer, and we went on sub in the fall. I think we sold after about a month.

I think it's important to be accessible, but I don't think writers should kill themselves trying to do everything. I've heard the most important thing a writer can do is work on his/her next book, and that makes the most sense to me. Tweeting all day long is not going to help your career in the long run, although I've certainly been guilty of that some days.

My worst bad habit, I would say, is craving instant gratification. That's what I wanted when I sent out my manuscript way too early, before revising it properly. Now I get my fix of early feedback from my critique partner, Megan Miranda. She's wonderful in that she'll read my first drafts and encourage me to keep on going, but she'll definitely let me know if I'm going off course.

I'd like to say that I put a lot of thought into my characters' names, but I usually just pick ones that I like. My husband and I have a hard time agreeing on baby names, so I tend to use the ones he won't let me give an actual child. I do consider things like age, but that's about it... Sometimes I name characters after my friends, just because.

What did you hope to accomplish by writing Slide? Do you think you have accomplished what you set out to do?

Certainly. Part of the reason I write young adult fiction is because that time was so crazy for me. I had a hard time figuring out who I was and what I wanted out of life, and the extreme emotions I felt during that time haven't completely faded away. Writing is kind of therapeutic for me because I can sort through all that junk I haven't been able to leave behind.

There is a lot of argument within the young adult market as to what is appropriate for teens to read. Where do you stand on this matter? Do you think teens should be protected from reading about taboo subjects or do you think they should have the freedom to choose their own reads?
I think teens should have the freedom to read what they want. When I was a teen (or a lot younger, actually), I read books by V.C. Andrews, Christopher Pike, R.L. Stine, and Stephen King. Books were an escape for me, and I never had trouble telling the fantasy of the stories from the reality of my life. I think a writer's primary responsibility is to tell a great story, and it's hard to do that when you keep thinking about what censors would consider "acceptable."

Here are some great 2012 books I've read recently: Fracture by Megan Miranda, Under the Never Sky by Veronica Rossi, and Everneath by Brodi Ashton.

I like to play Settlers of Catan with my family, eat burritos, and watch terrible reality television.

Thank you so much for your time, Jill. Before you go, could you tell me about any projects you have in the pipeline we can look out for?

Right now there is a SLIDE 2 in the works. Not sure about a 3. I'm also working on a horror novel.

Thanks for having me!!! So much fun!

*
So there you have it! Massive thanks to Jill for taking the time to visit Writing From the Tub and for giving me such a great interview - big yay for the Foo Fighters reference. Have a lovely day everybody!
Posted by CarlyB at 07:00