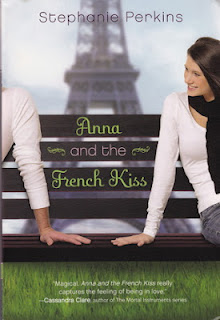 Summary (from Goodreads): Anna can't wait for her senior year in Atlanta, where she has a good job, a loyal best friend, and a crush on the verge of becoming more. So she's not too thrilled when her father unexpectedly ships her off to boarding school in Paris - until she meets Etienne St. Clair, the perfect boy. The only problem? He's taken, and Anna might be, too, if anything comes of her crush back home. Will a year of romantic near-misses end in the French kiss Anna awaits?

My review: Really, there isn't anything I can say about Anna and the French Kiss that hasn't already been said. Is there any contemporary YA out there that has had more positive reviews? I don't think so. Everybody, contemporary fans and those who aren't so keen, all seem to agree that this is one of the best releases in a long while. Even more exciting is that this is Perkins' debut novel. Awesome.

Anna has found herself at school in Paris, pretty much against her will. She has very little interest in anything French and is convinced her move to Paris is going to pretty much ruin her life. Of course, Anna quickly realises that moving to Paris might just be the best thing that ever happened to her, especially when St Clair comes onto the scene. Yes, he is as gorgeous and all around dreamy as everybody has been saying. It's so nice to discover a YA hero who isn't a borderline abusive control freak, that's for sure.

Anna is a wonderful character, impossible to dislike and you'll find yourself rooting for her from page one, just like I did. She's a little awkward and clumsy but not in the ridiculously annoying Bella Swan fashion, she's just a regular girl who makes the same stupid mistakes as the rest of us, which makes it so easy to like her. St Clair, too, is flawed enough to make him feel like a real person, rather than a two dimensional heart throb who has very little going for him, besides good hair. He has his ups and downs and I loved witnessing the struggle between St Clair, Anna and St Clair's girlfriend, Ellie.

The main strength in Anna and the French Kiss is the love story, without a shadow of a doubt. It was great to read about a relationship that doesn't develop within the first couple of pages of a book. It felt real, based on friendship and trust and a genuine foundation. The love story Perkins creates just shows why her and her characters are great role models for younger teens who may pick up her books. We need more Annas in YA and less Bellas, okay?

Although I did absolutely adore Anna and the French Kiss, there were a couple of niggley little things that did grate on me, although they didn't detract from my enjoyment of the story. Good lord, why did St Clair keep saying 'me mum'? Why? We know what his accent is, we know he wouldn't say that, we know he would say 'my mum'. Or just 'Mum', I thought. 'Me mum' just sounds like he's one of Fagin's Boys from Oliver. Not sexy.

If, for some reason, you haven't yet picked up Anna and the French Kiss go and order yourself a copy right now. You'll fall under Perkins' spell within a couple of pages and nothing will get you ready for summer more than the gorgeous story she creates against the beautiful Parisian backdrop.

First line: 'Here is everything I know about France: Madeline and Amelie and Moulin Rouge.'

Read if you liked…: Diary of a Crush: French Kiss - Sarra Manning, The Statistical Probability of Love at First Sight - Jennifer E. Smith