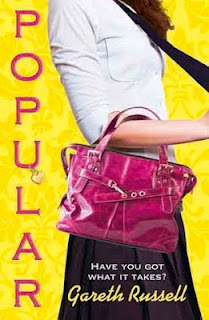 Summary (from Goodreads): AND HOW ARE WE?'

MEREDITH HARPER is rich, popular, manipulative and almost unnaturally beautiful. At the age of sixteen, she's already a social legend.

IMOGEN DAWSON, beautiful and sexy-chic, she's Meredith's best friend and a total bombshell. And doesn't she just know it. Then there's . . .

KERRY DAVISON, daddy's little princess with a passion for pink and a penchant for Fabulous Induced Breakdowns. Now meet

CAMERON MATTHEWS, six-feet tall, blue-eyed and the most popular guy in school.

Together they're unfathomably gorgeous and like, totally beau. But under the glamorous surface of parties and spa-days is a wealth of comforting lies and convenient silences, bitching, break-ups and scandal. Let the games begin . . .

My review: We don't live in happiest of times at the moment, do we? We're in the middle of a recession, the news is all doom and gloom and, as I'm writing this review, it's pissing it down with rain. Sometimes we all need a book to dive into that takes us away from the stresses and strains of every day life. If you're looking for that book then look no further because Popular is the perfect antidote to all of your worries.

Popular will have you laughing from page one and keep you thoroughly entertained until the end of the story. I devoured this book in a few sittings while me and my boyfriend were in the middle of redecorating - I'd had to pack all of my books away while we painted but I grabbed Popular at the last minute, knowing I'd want to read something that would help me chill out after a horrendous day filled with masking tape and matte magnolia.

As you might have guessed from the title and blurb, Popular resolves around Meredith Harper and her friends - the most popular group in their school. They're all rich, gorgeous and completely self-centered but in the most entertaining possible way. Sure, you'll want to hate Meredith for being a bitch or Imogen for having no morals but then you'll stumble across one of their hilarious one liners and you won't be able to resist their charms, I promise. Plus, every single one of the popular crowd goes through a journey throughout Popular that means they're a little more rounded and maybe even a little bit nicer than when their story started. As for me, well, l I have a huge soft spot for a lovable bitch so I fell in love with Meredith et al within the first few pages.

Although Popular is a light hearted story it does deal with some teen issues, mostly centered about relationships. I don't want to post any spoilers but I was so impressed with how Russell wrote the situation Cameron found himself in. I find a lot of YA books that deal with similar themes can be a little intense and super serious at all times, which I don't think makes them as accessible as their writers think. Russell struck the perfect balance, mixing sensitivity with humour and I loved it.

The dialogue and humour between the characters is definitely Popular's strength. There is quite a large cast involved but I got to know everybody very quickly and never found myself getting confused with who's who. Each character is so memorable that you won't have any problem forgetting them between reading sessions. Russell really delivers some golden one liners; I have a system where I fold down the corner of a page if there's a quote I want to remember - I don't think I've ever folded down so many pages in my life!

If I haven't already convinced you to pick up a copy of Popular then I just want to share a few of my favourite lines with you, which I'm sure will make up your mind:

- 'Just look at him. He's run so far back into the closet that he's practically having tea in Narnia with Mr Tumnus.' (Page 200)

- 'Never have I ever, um, shoplifted,' said Blake. Catherine, Kerry and Stewart drank. Kerry, who was already quite drunk by this stage, threw her head melodramaitcally into her hands.
'It was a pick 'n' mix,' she confessed. 'I was seven. I wanted a Milk Dud. I've never told anyone that before.' (Page 216)

- 'What a fascinating story,' said Meredith sarcastically. 'Can I please record it and use it as my ring-tone?' (Page 218)

- 'Oh my God,' muttered Meredith, 'what's that smell? Ah yes, the cloying stench of desperation...'
'Really? said Imogen. 'Is that what that is? I always get it so confused with bullshit.'
'I know, they're very similar, aren't they?' (Page 274)

I could go on, really. I love the style of writing in Popular. It's sharp, hilarious and always right on the money. The guys are gorgeous, the girls are beautiful and the drama is top notch. You really couldn't ask for more from a contemporary YA. Absolutely spot on.

First line: 'On the first Monday of September, Meredith Elisabeth Anne Harper stood staring at her own reflection in the huge mirror of her private closet on the first floor of her seven-bedroom, three-storey home in Malone Park, Belfast.'