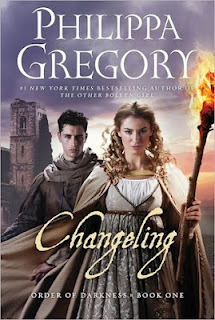 Published: 24th May 2012, Simon & Schuster
Pages: 260 pages, ARC
Series?: Yes, this is book one in the Order of Darkness series
Acquired: Kindly sent for review by the publisher

Summary (from Goodreads): Dark myths, medieval secrets, intrigue, and romance populate the pages of the first-ever teen series from #1 bestselling author of The Other Boleyn Girl

Italy, 1453. Seventeen-year-old Luca Vero is brilliant, gorgeous—and accused of heresy. Cast out of his religious order for using the new science to question old superstitious beliefs, Luca is recruited into a secret sect: The Order of the Dragon, commissioned by Pope Nicholas V to investigate evil and danger in its many forms, and strange occurrences across Europe, in this year—the end of days.

Isolde is a seventeen-year-old girl shut up in a nunnery so she can’t inherit any of her father’s estate. As the nuns walk in their sleep and see strange visions, Isolde is accused of witchcraft—and Luca is sent to investigate her, but finds himself plotting her escape.

Despite their vows, despite themselves, love grows between Luca and Isolde as they travel across Europe with their faithful companions, Freize and Ishraq. The four young people encounter werewolves, alchemists, witches, and death-dancers as they head toward a real-life historical figure who holds the boundaries of Christendom and the secrets of the Order of the Dragon.

The first in a series, this epic and richly detailed drama is grounded in historical communities and their mythic beliefs. It includes a medieval map of Europe that will track their journey; and the interior will include relevant decorative elements as well as an interior line illustration. And look for a QR code that links to a note from the author with additional, detailed information about the setting and the history that informed the writing. With Philippa Gregory’s trademark touch, this novel deftly brings the past—and its salacious scandals—vividly and disturbingly to life.

My review: When I was lucky enough to be invited up to London to meet Philippa Gregory and have a sneak preview of Changeling a couple of months ago I was pretty darn excited, I’ll tell you that for free. I hadn’t read any of Philippa’s books before and while it was tempting to dive into her backlist after meeting the lady herself I decided to hold off and make Changeling the first of hers that I read. I’m not the world’s biggest historical fan but Philippa was so inspiring to speak to and I’ve constantly heard such wonderful things about her novels over the years that I was beyond thrilled when my copy arrived last month.

I’m not generally a huge fan of books that are massively hyped up before release as I find they inevitably disappoint but, for once, the hype and buzz is absolutely deserved. Changeling is one of the most intriguing and well written novels that I’ve had the pleasure to read in a very long time and I cannot wait for all of you to read it, as I know you’re going to absolutely love it. I think Philippa Gregory may have single handedly turned me into a bit of a historical fan – bet you never thought you’d read those words, folks. No, there are no bitchy blonde cheerleaders or house parties between the pages but I fell in love with the sharp dialogue, memorable characters and beautiful visuals that Gregory creates in Changeling.

The first thing I want to talk about is the humour, as I never expected this book to be so funny. I genuinely laughed out loud more than once and Freize is one of the most comedic characters I’ve come across in a while. His relationship with Luca was one of my favourite elements of the story – they reminded me a little of Jon Snow and Sam Tarly in the Game of Thrones series but Freize and Ishraq's relationship is definitely one to watch in future books, I think those two could make an excellent team. Freize was far and away my favourite character; he’s smart, hilarious but also sweet, especially as the book moves into the last third and we see the goodness and kindness in him, when most characters display their bad side.

To prove my point that Freize is a comedy genius, I want to share my favourite quotation, taken from page 174 of the UK proof:

'Never eaten anything that couldn't be speared on the tip of a dagger,' Freize offered from the doorway.
'Enough,' Luca advised this most interfering servant.
'Or sucked it up,' Freize said. He paused for a moment, to explain more clearly. 'If soup.'
"'If soup!'" Luca turned on him wrathfully. "'If soup!" For God's sake, be silent. No, better still, wait in the kitchen.'
'Keeping the door,' Freize said, motioning that his work was essential. 'Keeping the door from intruders.'
'God knows, I would rather have an intruder, I would rather have a band of brigands burst in, than have you commenting on everything that takes place.'


Freize shook his head in remorse and once again folded lower lip over upper lip to indicate his future silence. 'Like the grave,' he said to Luca. 'You go on. Doing well: probing but respectful. Don't mind me.'


Even though I was completely engrossed in the story, I couldn’t help but make some technical notes about the sheer perfection that is Gregory’s pacing. She used snappy, short sentences to increase the pace in the action scenes and long, flowing paragraphs of gorgeous description during the more sedate moments. Anyone who knows me knows I do appreciate a well paced novel! Little things, and all that.

I touched on this earlier on in this post but I just want to mention again how visual Changeling is. There are so many scenes and locations that I saw so clearly in my mind and I think it’s a huge strength of Gregory’s that she gives us just the right amount of description to set the scene but pulls back enough to let the reader add in their own little details about the setting. I would love to see this on the big screen, there are so many elements that I know would work brilliantly, so fingers crossed for that.

Even though Changeling is the first book in a series I didn’t feel like we were left with a huge cliffhanger that was written purely to entice us into buying the next book. Although it’s clear that the overall story arc isn’t over, there are two wonderful stories in Changeling that make it a self-contained novel that could be picked up as a standalone. I’ll absolutely be racing to get the next book in the series but it was nice to read the first installment without feeling as though I was short changed by the ending.

Changeling is a breath of fresh air among the stacks of dystopia and paranormal series that are still dominating the YA marketplace. Books like this are exactly what we need more of: Engaging from beginning to end, wonderfully written and penned by an author who clearly adores her craft and knows her story and characters inside out.

First line: 'The hammering on the door shot him into wakefulness like a handgun going off in his face.'