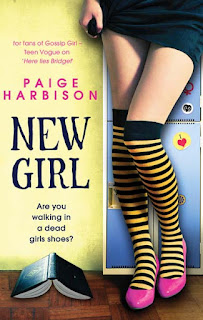 Published: May 4th 2012, Mira
Pages: 314 pages, paperback
Series/standalone?: Standalone
Acquired: Kindly sent for review by the publisher (US paperback purchased myself as well, because I'm a hoarder)

Ever since I arrived at exclusive, prestigious Manderly Academy, that’s who I am. New girl. Unknown. But not unnoticed—because of her.

Becca Normandy—that’s the name on everyone’s lips. The girl whose picture I see everywhere. The girl I can’t compare to. I mean, her going missing is the only reason a spot opened up for me at the academy. And everyone stares at me like it’s my fault.

Except for Max Holloway—the boy whose name shouldn’t be spoken. At least, not by me. Everyone thinks of him as Becca’s boyfriend…but she’s gone, and here I am, replacing her. I wish it were that easy. Sometimes, when I think of Max, I can imagine how Becca’s life was so much better than mine could ever be.

And maybe she’s still out there, waiting to take it back.

My review: Paige Harbison’s debut, Here Lies Bridget, was one of my favourite reads of last year. I adored her style, her realistically flawed characters and the way her writing had the ability to have me laughing one paragraph and weeping pathetically the next. When I was offered the chance to review her latest offering, New Girl, I jumped at the chance, naturally.

New Girl is a retelling of Daphne du Maurier’s classic romantic thriller, Rebecca. I’m sure you’ll all agree with me when I say that Rebecca is, without doubt, one of the greatest novels of all time. I absolutely adore the story and the novel is right at the top of my top ten list, tied only with The Bell Jar.

But I’m getting sidetracked.

I was intrigued to see what Harbison did with New Girl, given that Rebecca is such a beloved novel. It was definitely a bold move on her part, bolder still that she reimagined it as a YA, complete with drinking and pretty boys. See, that last sentence is one of the reasons why I love this writer. Not many people would have the balls or the skills to pull that off but Harbison does it with style, grace and some brilliant one liners. Some of you may be put off by the Rebecca retelling but don’t be – it’s subtly done and with clear love for the original, which I think is always the key with reimaginings.

New Girl is one that can appeal to so many different readers. Contemporary fans (like me) will eat this one up but it’s also a great story for you paranormal fans out there. I don’t think it matters whether you’ve read Rebecca or not as the story stands out on its own, I just think knowledge of the original will enhance your enjoyment of New Girl but it certainly isn’t necessary, which is great.

Becca is, to put it mildly, a massive bitch. I’m sure a lot of readers will probably hate her but I thought she was pretty awesome. I do love a good bitchy character. Okay, she isn’t very likeable and definitely has a nasty streak but at least she feels like a real person. I’d much rather read about characters who might not always be pleasant but are realistic, rather than 2D characters who are filled with rainbow and unicorn farts and never put a foot wrong. Lame. Bring on the bitches, I say. Harbison is a pro at creating characters who have a tendency to err on the side of full on biatch but you can’t help liking, it happened in Here Lies Bridget and again in New Girl.

Our protagonist in New Girl is a great reimagining of our heroine in Rebecca. She’s meek and mild to a point but knows when to stand her ground and stick up for herself. Girlfriend ain’t no pushover. Her relationship with Max was great; I loved the mystery and angst and stolen glances and all that lovely teen drama. I’d really like to see New Girl as a Lying Game/Pretty Little Liars style TV show with a single season run. YES. (TV execs, make this happen. We need more single season TV shows, please, to avoid the RAGE that spills forth when a favourite gets axed right on a cliffhanger – WHY WOULD YOU DO THAT?!)

If, like me, you’re beyond excited that we’ve finally a teeny tiny bit of sunshine and are already preparing a pitcher of Pimms for the next time the sun deigns to shine on us then you need New Girl in your life. I can vouch for the fact it is best enjoyed while sunbathing and sipping a hideously bright coloured cocktail. And I’m pretty sure I said almost the exact same thing in my review for Here Lies Bridget. Paige Harbison is clearly to blame for my drunk reading habit. Originally I wrote ‘drunk reading problem’ but deleted that shit because it sure as hell isn’t a problem. More like a gift.

First line: The panoramic view outside the windows of the bus showed a world that wasn't mine.