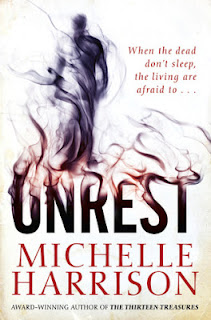 Summary (from Goodreads): Seventeen-year-old Elliott hasn’t slept properly for months. Not since the accident that nearly killed him. Sometimes he half-wakes, paralysed, while shadowy figures move around him. Other times he is the one moving around while his body lies asleep on the bed. His doctors say sleep paralysis and out-of-body experiences are harmless - but to Elliott they’re terrifying.

Convinced that his brush with death has attracted the spirit world, Elliott secures a job at a reputedly haunted museum, determined to discover the truth. There, he meets the enigmatic Ophelia. But, as she and Elliott grow closer, Elliott draws new attention from the dead. One night, during an out-of-body experience, Elliott returns to bed to find his body gone. Something is occupying it, something that wants to live again - and it wants Ophelia, too...

My review: To celebrate the release of Unrest I, along with a few other bloggers, was invited up to London for a ghost walk with members of S&S and the lovely author herself, Michelle Harrison. It was such a fun event and I had an awesome time so I just want to say a huge thank you to S&S and Michelle for inviting me.

There aren’t enough ghost stories in the world of YA at the moment so I was so excited to get my hands on a copy of Unrest. I was hoping for shadows skittering across the page in a glint of light, moments where I had to hold my breath and a general feeling of ‘how the hell are they going to get out of this one?’. Unrest completely delivered on all counts and Harrison’s latest novel is a lovely little ghost story that stayed with me much longer than I initially thought it would.

When I finished reading Unrest I was wholly satisfied and moved onto my next read (The Hunt, if anyone’s interested), content that I’d just had a thoroughly pleasant reading experience. However, I found myself thinking about Unrest quite a lot over the next few days, which just goes to show this is an insidiously powerful story, the way the best ghost stories are.

Stepping things up a notch from the Thirteen Treasures series, it’s clear from the outset that Harrison’s style is perfect for the YA age range and I can’t wait to see what she does next. We dive straight into the action in Unrest, with one of the best opening chapters I’ve read in a long while, filled with genuine scares and some wonderful turns of phrase that really did creep me out. The structure of Unrest felt like a classic horror movie, with the pace dipping and rising in all the right places. By the end of the story everything is so frantic it’s impossible to look away; I read the book in a single sitting and, for me, that’s the optimum way to enjoy any scary story.

I bonded with Elliott from page one and was rooting for him the whole way through his journey. When we learned about the accident that has led to his lack of sleep and haunting visitors I cared even more, so Harrison did a great job of creating a character that readers will really warm too. It did take me a little longer to warm up to Ophelia and I found her difficult to trust but she’s certainly an interesting character that I won’t forget in a hurry, which is infinitely more important that just being ‘likeable’.

The subplot and mystery of the ghost who used to live in Elliott’s flat was my favourite part of Unrest. It wasn’t given much page time but it didn’t need it, Harrison is a master of succinct writing and I love that she doesn’t waste words. Unrest is quite a lengthy book and could have got a little stale if the prose was overwritten but Harrison kept the language simple and the action ongoing, which kept me entertained for the whole 375 pages.

I haven’t read a modern YA novel like Unrest, I’ve seen a couple of mild comparisons to Anna Dressed in Blood but I haven’t read it yet (I’ve just started, though, and it’s great so far!) so I can’t comment on that. Either way, I really enjoyed Unrest and look forward to reading Harrison’s next YA offering.

First line: It started the way it always did.