From Stepping Out of the Page: From the Review Pile is a meme hosted by Stepping Out of the Page every Thursday. The aim of this meme is to showcase books that you've received for review (or anybook that you own and really want to read/review) but haven't yet got around to reading, in order to give the book some extra publicity.

2012 has been a busy year at Writing from the Tub in terms of review copies and a combination of focusing on my own writing and a lot of real life busy-ness has meant I haven’t been getting through new releases as quickly as I’d like. There are so many wonderful books on my shelves that I’ve been sent by publishers that are waiting to be read, so I’m looking forward to using From the Review Pile as a way to give them a bit of coverage and publicity while I’m working my way to them.
172 Hours on the Moon - Johan Harstad
I've been promised 172 Hours on the Moon is a creepy, atmospheric sci-fi novel, what's not to like? I watched Prometheus at the cinema a couple of weeks ago so I've been looking for a sci-fi book with a retro feel to read - I think this just might be it! 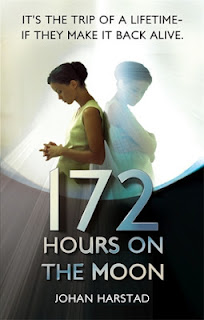 Summary (from Goodreads): It's been decades since anyone set foot on the moon. Now three ordinary teenagers, the winners of NASA's unprecedented, worldwide lottery, are about to become the first young people in space--and change their lives forever.


Mia, from Norway, hopes this will be her punk band's ticket to fame and fortune.


Midori believes it's her way out of her restrained life in Japan.


Antoine, from France, just wants to get as far away from his ex-girlfriend as possible.


It's the opportunity of a lifetime, but little do the teenagers know that something sinister is waiting for them on the desolate surface of the moon. And in the black vacuum of space... no one is coming to save them.

In this chilling adventure set in the most brutal landscape known to man, highly acclaimed Norwegian novelist Johan Harstad creates a vivid and frightening world of possibilities we can only hope never come true.
Posted by CarlyB at 07:00

Labels: From the Review Pile