Hi everybody! How are you all this morning? I've got Diana Hendry here with me today for an interview, as she was kind enough to answer a few of my questions. I reviewed her latest release, The Seeing, a few weeks ago and absolutely loved it. If you haven't had a chance to read it yet then I really do recommend it; it's one my favourite 2012 releases so far! 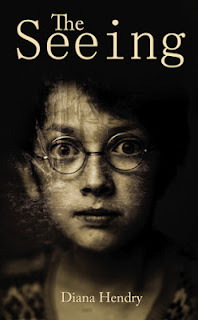 Well, this book has had so many drafts that there hasn’t really been an ‘average day’.  One of the things I do that really helps me, is to write for an hour before breakfast – say between 7 a.m and 8 a.m.  This means I get a feeling of having accomplished something (even if I tear it up afterwards) before the day really gets going.

If what I’m writing goes well, I probably carry on from about 10 (I go for a swim some mornings between 8 – 9) until 1 or two.  Sometimes I do an extra hour or two late afternoon.  It’s really pretty varied.

No!  I love music, of all sorts, but not when I’m writing.  There’s a rhythm to language and I don’t want it disturbed by the rhythm of music.  I don’t really like anyone else in the house!

Are you a plotter? Have you always been this way?

A plotter?  Sometimes, as with The Seeing, I have a strong idea about the ending.  I’m not naturally a plottter but I’m very pleased if I get one.  Seomtimes I plot from chapter to chapter.  It’s quite exciting just to see where the story is taking me.

Can you tell me a bit about your journey with The Seeing? When did you first come up with the idea and what were the timescales involved between the first draft and the finished article?

My journey?  Ye gods, Carly, do you want a life story?  I was haunted by the idea of a left-over Nazi when I was a child.  The book has taken about six years to write.  Yes, I know that’s ridiculous and it’s a very short book, but that’s how it goes.

I think the publishers would tell me it’s very important.  I don’t do Twitter and you won’t find me on Facebook.  That’s because a) I’m quite a private person and b) it would take up too much of my time when I’d rather be writing or playing the piano or talking to friends or almost anything.

Is naming characters important to you? What processes do you go through to come up with names for your characters?
Yes.  I’m not sure there’s a process ...mostly I just try out a few names.  I’ve got a dictionary with a long list of names and sometimes I used that.  Or, for a second name, I scan the books on my shelves until I find one that I think fits.  I think a name for a characters can tell you a lot.  I don’t think Lizzie, Natalie and Philip tell you much though ... I like the name Lizzie.  I think from the memory of a story about Lizzie Dripping.  I don’t know any Natalies.  Philip/pip – well, I had been re-reading Great Expectations ...

What did you hope to accomplish by writing The Seeing? Do you think you have accomplished what you set out to do?

I don’t know really.  I would like to have written an adult novel, and The Seeing sort of began that way.  So I probably haven’t accomplished what I set out to do.  Maybe that’s a good thing.? No, I don’t think it is!  I’ve sort of surprised myself with The Seeing – and that is a good feeling.

I think they should be free to read whatever they like.  And how could anyone stop them anyway?

Thank you so much for your time, Diana. Before you go, could you tell me about any projects you have in the pipeline we can look out for?
Thanks for your interest Carly.  Well, I’ve rather gone back to writing poems at the moment. I’ve done a libretto for an composer which is a re-telling of The Pied Piper of Hamlyn.  It’s for a choir in Switzerland who will be singing it next year.  It’s the first time I’ve done anything like that and I really enjoyed it.  Random House have re-issued my three Harvey Angell books – now and again, well quite often really, I think about writing a fourth.  I’ve a notion that Aunt Agatha might get kidnapped.  But it’s only a notion.

I want to say another huge thank you to Diana for stopping by and just give one more shout out to The Seeing - you won't be disappointed by it, I promise.
Posted by CarlyB at 07:00