Hi everybody! I'm joined today by Gill Lewis (a fellow Bath Spa alum, woop!), who kindly offered to answer a few of my questions about her writing process and her latest book, White Dolphin.

Without further ado, I'll hand you over to Gill... 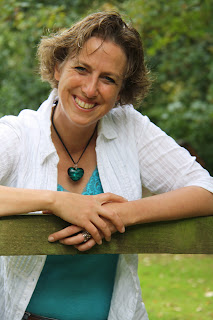 1.      Hi, Gill! In case any readers haven’t read the book yet, can you tell me a little bit about White Dolphin?

Hi there! Yes…White Dolphin is a story of Kara’s search to find the truth behind the disappearance of her mother, set against her determination to save the reef in the bay of her home town from commercial scallop dredgers. When Kara sees a white dolphin in the bay, she believes it is a sign from her mother, a sign that her mother is out there somewhere waiting for her. However, when she finds the dolphin stranded on the beach and in need of help, Kara finds that friendship comes from least expected places.

2.      Talk me through an average day when you’re working on a novel. Do you have a set number of words you have to write per day or do you set yourself different targets?

There is never an ‘average day’, although I do have to set strict time aside to write or research. I find I’m most creative between 9am and 1pm. If I have a strict deadline looming then I work after lunch until school pick up time. I usually use the afternoons and evenings to catch up on emails and other non-writing stuff.
When I’m working on a new fresh draft, it takes me about an hour to sink back into the story, then another half hour to get a cup of coffee and put some washing on, and then at about 10.30am I start to write. I’ve tried to eliminate this seemingly wasted hour and a half, but have found that I can’t…I think I need it to ‘see’ the story in my head. I’m an incredibly slow writer and find that if I give myself word count deadlines then I tend to panic. Instead, I try to visualise a scene and write that scene. I probably average about 1000 words on a good day.


3.      What sort of research did you have to do for White Dolphin? How did you go about doing this?

I did LOTS of research. Like many authors, I find I have to do hours of research, often just to make one sentence authentic. For White Dolphin, I read books on dolphins and a fabulous book on the threats facing our oceans called The Unnatural History of the Sea. I’ve watched documentaries including, The Cove, about dolphin slaughter in Japan. I’ve talked to fishermen, and staff of Finding Sanctuary, a group advising about Marine Protected Areas around the UK. I’ve learnt to sail a dinghy…(and found to my disappointment that I wasn’t a natural, but it all added to the flavour of some scenes). I’ve watched a mock-up of a dolphin rescue. I’ve been on boat trips to watch wild dolphins. I’ve researched boat-building techniques. I’ve spoken to vets who work for the Marine Life Rescue. I’ve interviewed young people with cerebral palsy, including a young sailor also trialling for the Paralympic swimming squad.  I also wrote the whole story with a tide timetable next to me, to make sure there was continuity in the scenes with the state of the tide.

4.      The children’s and YA book market is a competitive place, what do you think sets White Dolphin apart from the pack?

It is a competitive place and there are fantastic books and authors out there. It’s important to have lots of choice and a wide range of genres of stories for young people to choose from. I hope that readers of my books enjoy not only the wildlife story, but the human story behind it too.

5.      Some writers relate take great inspiration from music while they’re writing. Do you listen to music while you’re writing? If so, what artists/bands do you like to listen to while you write?

I’m not one of those writers!!! I get distracted too easily and need a quiet space in which to write. However, I do associate characters and scenes with certain songs and will play the song in the car as I’m driving, to work out a scene in my head.

Hmm! Somewhere in the middle. I have a rough idea of the beginning and end, and know a few key major happenings on the way, but otherwise I just write and see which characters turn up. I liken it to booking a bus journey, knowing where I’m going and some of the stop-off points, but I don’t know who’s going to join me on the journey, or what I’ll see out of the window. Writing the story by this method does mean a lot of re-writing to re-structure plot, but I like to think it keeps the story fresh and spontaneous for me too.

7.      Can you tell me a bit about your journey with White Dolphin? When did you first come up with the idea and what were the timescales involved between the first draft and the novel being accepted for publication?

White Dolphin originally started as a story for younger readers about a girl who could understand the dynamics of dolphin ‘speech’. However, the more I researched, I became fascinated by marine conservation and decided that dolphins didn’t need to be given magical properties at all. They were fascinating in their own right. The idea began swirling in my mind for several months and the idea was accepted as part of a two book deal with Sky Hawk. The first draft took about five months to write, but then I realised I had taken a wrong turn in the story and needed to re-write about the last two thirds of the story completely. However, it was only by going wrong, that I discovered the story I wanted to write. The first draft to acceptance took about nine months.

For me, the most important thing I learned was how to edit. Before I started the course, I thought editing was a quick spellcheck, but now I realise it means looking at your work, being ruthless, cutting out whole chapters, bringing in new characters…etc. It was also great to be in a nucleus of talented writers too and to feel for the first time that writing could be more than just a hobby. Studying creative writing at Bath Spa also gave me the discipline to put time aside for writing…something very difficult to do in many people’s busy lives.

9.      How important do you think social media (i.e. Twitter/Facebook/blogging) is in today’s market for a writer?

I don’t know, is the honest answer. I suppose you have to think want you want it to do. I like twitter because it keeps me in contact with other writers and the publishing world. I’m not sure if it raises my profile, but it’s fun and doesn’t take too much time. I have Facebook, but I don’t use it that much. I keep in contact with personal friends and writers I have met. I don’t write much about myself on Facebook. I know many authors have a Facebook author page. My books are marketed at 9-12 year olds, so there are probably fewer users of Facebook in that age range.
I think an author website is important. It seems to be the first port of call for readers, teachers, and librarians etc to contact the author. It can give useful information on news and events, although I have to admit I’m hopeless at keeping mine updated
Blogging…yes I think this is probably useful and also something I find very difficult to keep up with.


10.   What would you say is your worst bad habit when it comes to writing?

11.  Is naming characters important to you? What processes do you go through to come up with names for your characters?

Names are important and they have to be right. Some names just pop into my head, yet others, I agonise over. In White Dolphin, Kara’s name means ‘love’ in Cornish. This was very important, as it is love that binds her with her mother and father. Even the non-human characters, I have to think about. The boat in White Dolphin is called Moana from the Maori name for ocean. The osprey in Sky Hawk is named Iris, after her leg ring bears the letters RS, which sounds like ‘Iris’ if you say the letters quickly together. Iris is also the Greek name of the Goddess of the wind and sky.

12. What did you hope to accomplish by writing White Dolphin? Do you think you have accomplished what you set out to do?

That’s a difficult question. I don’t think I ever write with an accomplishment in mind (other than finishing the story!) but I suppose it is a story about things that I care passionately about, and I hope that comes across to the reader. I would love readers to enjoy the story and also come away with an awareness of the threats facing our oceans

13.  Aside from writing, how do you like to spend your free time?

Ah ha! Time! We all need a little more time! I have three children; and so spend non-writing time with them. My one hobby is swimming. I love it because it is like mental yoga…I can completely relax my mind. Rather bravely or stupidly, I have signed up for a 10km swim down the River Dart. I’m hoping for some dolphins to give me a lift.

14.   Thank you so much for your time, Gill. Before you go, could you tell me about any projects you have in the pipeline we can look out for?

I love the book I’m currently writing. The subject matter of the story is something that I feel very strongly about, but I feel a bit jinxed if I talk about it, so I’ll wait until my editor has seen it first! 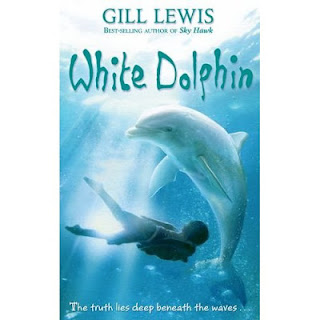