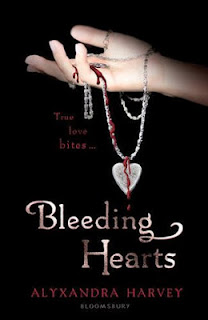 Summary (from Goodreads): As vampires from all over the world descend on the Drake farm for the Blood Moon gathering, security is ramped up. Lucy has been temporarily banned, for her own safety--and to allow Solange some time to adjust to her new existence. But their enemies realize how much Lucy means to the family, and plan to abduct her to use her for leverage against the new royal family. Instead, Lucy's cousin Christabel is kidnapped by mistake--and Connor Drake immediately heads off in pursuit, but isn't in time to prevent Christabel's infection by the Hel Blar. He can't save her human life, but he can still try to save her new "vampire" life, and is willing to put his own life on the line for the girl he has grown to care so much about. Can he save Christabel, the Blood Moon, and his mother's newly forged Vampire Alliance?


My review: So I’m not exactly famed for being a fan of paranormal romance novels. In fact, you could say I’m quite the opposite of a fan. Even so, I’ve always been vocal about my love of the Drake Chronicles, penned by the amazing Alyxandra Harvey. This is one of the only paranormal romances series that I read and, more than that, it’s definitely one of my favourite series ever. I’m pleased to report that I loved Bleeding Hearts just as much as the other three books in the series and am already raring to get started on Blood Moon, which happily clattered through my letter box a couple of weeks ago.

All of your favourite characters are back in this installment, including the Drake brothers we all know and love. How has Harvey managed to create so many swoonworthy male characters without making any of them stereotypical, two dimensional or annoying? Seriously, she’s a marvel. Each one of the Drake brothers is a strong character in his own right and I feel like I know them all so well, even though this is only book four in the series. Nicholas is still my favourite, obviously, but I really developed a bit of a soft spot for Connor in Bleeding Hearts.

One of the things I love most about Harvey’s books is that it’s so easy to put them down and pick them up without forgetting a single detail. I stopped reading Bleeding Hearts for a couple of weeks because of my trip to Berlin etc but when I started it again I settled back into the story instantly, without any need to flick back and reread the last few chapters I’d read. To me, that says a hell of a lot about the strength of her characters and her storytelling, as I genuinely think the characters she’s created (Nicholas and Lucy, in particular) are some of the most memorable out there at the moment.

The tension is ramped up in Bleeding Hearts more than it has been in any of the Drake Chronicles so far. We’re in the thick of things right from the word go and the whole novel builds to a final climactic scene that is so exciting I actually felt a bit knackered by the time I’d finished the book. Everything is so visual with such subtle description that I felt completely immersed in the Drake world – we have got to see a series of film adaptations soon, surely? The series gets my vote for the next big YA franchise!

Before reading Bleeding Hearts I’d heard a lot about the cliffhanger at the end of the book. Obviously I’m not going to give anything away so I’ll just say this – it’s truly evil and I’m so glad I have my copy of Blood Moon to hand to put me out of my misery asap!

I love that each of the books has its own self-contained story and can be read as a standalone in its own right but the central story arc of the series is so strong I doubt anybody could read just one book out of the series without needing to devour the rest. Harvey’s writing style is so current and so Whedon-esque she’s absolutely one of my favourite YA writers, particularly for her cracking dialogue that is always completely spot on, managing to feel current but timeless at the same time. Ahk, the only downside is that I always come away from her books with major writing envy.

If you haven’t met Alyxandra Harvey at an event yet do take the time to go and see her – I’ve been lucky enough to meet her twice and she’s one of the funniest, loveliest writers I’ve met so go, go, go! I realise this has turned into more of a rave than a review but, honestly, I’m pretty sure you don’t need me to deconstruct the technical side of things to encourage you to read it. Basically – a gazillion hottie brothers that are all reminiscent of a young Johnny Depp, do you really need more of a reason? Just in case you do, the Drake brothers aren’t the only treat in store, you’ll also discover the best example of vampire mythology I’ve come across, hilarious one liners and absolutely unforgettable characters; that’s a promise.

First line: '"The fact that we have to fetch our baby sister home because she's out later than we are is just sad," Quinn grumbled.'