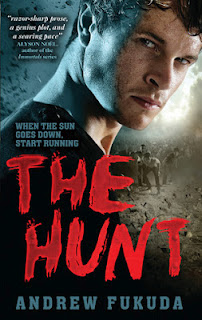 Published: May 10th 2012, Simon & Schuster
Pages: 293 pages, ARC
Series?: Yes, this is book one.
Acquired: Kindly sent for review by the publisher

Summary (from Goodreads): Against all odds, 17-year-old Gene has survived in a world where humans have been eaten to near extinction by the general population. The only remaining humans, or hepers as they are known, are housed in domes on the savannah and studied at the nearby Heper Institute. Every decade there is a government sponsored hunt. When Gene is selected to be one of the combatants he must learn the art of the hunt but also elude his fellow competitors whose suspicions about his true nature are growing.

My review: My feelings towards vampires are very up and down. On one hand, I cannot begin to express how sick I am of vampire/human romances, Twilight rewrites (Twilight itself, for that matter) and, really, any book that portrays vampires as anything other than bloodthirsty killers. On the other hand, however, the Drake Chronicles is the only paranormal series I read and I adore it. I was also a big fan of Matt Haig's The Radleys, so it's not all negativity as far as vampires are concerned. Thankfully, The Hunt is definitely on the side of The Radleys and The Drake Chronicles and is absolutely one of the best vampires books in the world of YA.

Finally, vampires are scary again! I've been waiting a long time for a writer to really shake up the new 'vampires are sexy and make great boyfriends' stereotype and Andrew Fukuda answered my plea. The vampires (or 'people') in The Hunt are terrifying and genuinely gave me chills, which is exactly how it should be. They're ruthless, cunning and filled with a bloodlust so intense they lose all sense of reason the second a human (or 'heper') is in the vicinity...which makes things a little difficult for Gene, a human disguising himself as a vampire in an attempt to survive in a future where vampires are the norm and humans are all but extinct.

I'm not going to talk much about the plot here, as it would be very easy to give away spoilers and there are so many twists and turns that you really need to go into this one as blind as possible. I loved that I couldn't predict anything that was going to happen and there were some genuine surprises, which kept me interested the whole way through.

The Hunt is a truly unique novel and a refreshing change to the vampires that have become so popular lately. I'm so happy to see Fukuda restoring vampires back to the way they should be, about time! I love his style, his simplicity and his frantic, immediate pace of storytelling. I will definitely be keeping an eye out for his future releases and I'm convinced he has a huge career ahead of him. Any fans of creepy reads of those of you who want to try something a bit different - definitely pick this one up, I loved it!

First line: There used to be more of us.