I've got Keith Austin here at Writing from the Tub today to talk about his writing process, particularly looking at how he wrote Grymm, his young adult novel which is out now, published by Random House.


I'm reading Grymm at the moment and I'm really, really loving it. It's such a creepy, unsettling read but in a brilliant way. I definitely recommend it and do look out for my review, which will be coming as soon as I finish the book.

I'm always fascinated to hear how each writer approaches the craft of writing so I really enjoyed reading this post; I hope you guys do, too! 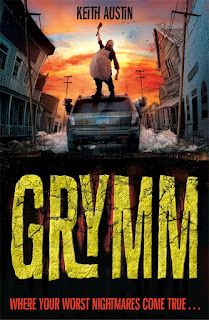 Grymm was the first time I had ever taken time off work to do nothing but write. Before that any extra-curricular writing was squeezed into the spaces not taken up by my day job as a journalist.

As such, it seemed that a writing pattern needed to be established, and who better to get advice from than the great Stephen King. If anyone knows how to write then it would be him.

And so to On Writing, King’s memoir-cum-How-To book in which he advises that it’s best to treat this writing lark as, well, not a lark. It’s a job, he says, and it needs to be approached as such.

I took his advice: my partner created a writing den in the garden shed and I took myself off there every morning on the dot of 9am. I worked until 1pm, took an hour – and only an hour, mister - for lunch and then kept going until 6pm. A good, solid seven hours of work a day.

And it worked; the words poured out and within a month I had 20,000 words of an adult horror/thriller called Skink on screen. I say again: twenty thousand words.

And they were … rubbish. Twenty thousand words of stilted, straight-jacketed, cliched tosh.

I threw them away, hit delete, started again.

This time I woke up when my eyes opened, usually around 9.30am (I was, after all, off work), got dressed, threw a lazy leg over the bicycle and coasted down to the various cafes that abound in the Bondi beach suburb where I lived.

There was the Lamrock, right on the main parade opposite the beach – and where, one day, the guy who would become Cleaver Flay walked past – there was the Blue Orange café where a waitress with an octopus tattoo served me, and Gertrude & Alice, the wonderful secondhand bookshop-cum-café where the bulk of Grymm was eventually written.

In these places I would make notes, watch the world go by, write a few pages or just a few paragraphs. Then it was home, lock myself in the shed sometime in the early afternoon, and write until, basically, I was finished. Three months later I had the first draft of what was to become Grymm. That was nine years ago.

The process hasn’t changed much since then except that, now, the great majority of a book is written in longhand in a lined A4 notebook (as this is) in cafes and pubs (as this is). It’s as if my mind craves the noise, the hubbub. I am finding it increasingly difficult to write fiction straight into a laptop. Journalism, yes, but not fiction.

My second manuscript for Random House UK was written in a café in Bondi Junction in Australia and in various pubs in East London and the small Berkshire village where my partner’s parents live.

Of course, back at the ‘office’, wherever that might be, I still have to type the thing in, and that’s when the second draft happens. That’s when I refine (or decipher) the arcane scribblings that other people call handwriting. This process takes a little longer as, despite more than 30 years in journalism, I still only type with two fingers.

This has also made me wonder if I prefer to write in a notebook because I can write faster than I can type and I need to get this stuff out of my head and on to paper as fast as I can think it.

And when I do sit down to type it in, a 1000-word excerpt can easily turn into 1500 words or 500 words depending on whether I like it and can riff off an idea or an image, or whether I wonder what idiot wrote that.

What is sure, though, is that I have to work to music – and not any old music. It has to be Roxy Music, the band started by Bryan Ferry and Brian Eno in 1972 and whose music I have listened to ever since.

The last Roxy album came out in 1982 so there’s no ‘new stuff’ to listen to. Which is the point. It’s music I know so well that it becomes background noise for the majority of the time – the equivalent of the café/pub hubbub, I suppose.

And then, on occasion when I look up, startled, from my make-believe world, the music is familiar, undemanding, not needy in the way that new music can often be.

When starting, though, I select shuffle on the iPod or iTunes and always start with the same song. And when Bryan Ferry croons “Blue sunset and grey lagoons…” I know it’s time to write.

GRYMM by Keith Austin is published by Red Fox/Random House UK and is out now.
Posted by CarlyB at 07:00