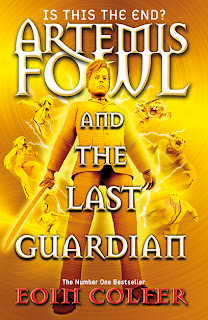 *Non-spoiler alert: There aren't any actual spoilers in this review - though there is a small quotation from page three of the novel; it is marked in the review where it begins*

Summary (from the back cover): Opal Koboi, power-crazed pixie, is plotting to exterminate mankind and become fairy queen.


If she succeeds, the spirits of long-dead fairy warriors will rise from the earth, inhabit the nearest available bodies and wreak mass destruction. But what happens if those nearest bodies include crows, or deer, or badgers - or two curious little boys by the names of Myles and Beckett Fowl?


Yes, it's true. Criminal mastermind Artemis Fowl's four-year-old brothers could be involved in destroying the human race. Can Artemis and Captain Holly Short of the Lower Elements Police stop Opal and prevent the end of the world?

My review: Well, it's finally here: the release day of Artemis Fowl and the Last Guardian, the final installment in Eoin Colfer's beloved series. For over a decade children and adults alike have fallen in love with the world Colfer has created for one of the most memorable characters in children's literature - Artemis Fowl. It's always a bit of a nervous moment, isn't it, reading the final book in such a treasured series? It could go so very, very wrong but I'm happy to report that when it comes to this series, Colfer has got things so very, very right.

Artemis is back, smarter and funnier than ever before. He's back on top form, with some of the best dialogue I've read in a long while. Artemis is such a complex character, with so many layers and sides to his personality. He's truly interesting to read about and I'm sure there isn't a reader around who isn't always absolutely rooting for him - despite his sometimes questionable behaviour! But isn't that what makes him such a great character? I'm not always such a huge fan of series but, with books like the Artemis Fowl stories, it's such a wonderful opportunity to really get to know the characters, to watch them grow and grow with them on their journey.

As always, Colfer gives some truly laugh out loud moments in The Last Guardian, which do lighten the tone of what is surely one of the most intense Artemis Fowl books in the series. One of my personal favourite scenes is one of the first in the book, which sees Artemis undergo a therapy session with Doctor Argon, the gnome psychiatrist. I just wanted to share a little passage (from page three) with you, in case you were on the fence about whether or not to pick up a copy of this one:

'From the Case Notes of Doctor Jerbal Argon, Psych Brotherhood:


2. For the past six months Artemis has been undergoing weekly therapy sessions at my clinic in Haven City in an attempt to overcome a severe case of Atlantis Complex, a psychological condition that he developed as a result of meddling in fairy magic. (Serves him right, silly Mud Boy.)


...5. Discuss my theory of relativity with Artemis. Could make more a very interesting chapter in my v-book: Foiling Fowl: Outsmarting the Smarty-Pants. (Publishers love the title: cha-ching!)'

I love just the humour Colfer manages to inject into every situation. It makes his books so much fun to read and I'm sure is a big part of the reason his books are read so widely and by so many different people, young and old.

We see our hero, Artemis, embark on the greatest journey so far; he is tested to his absolute limits, with the fate of humanity resting on his shoulders. Who ever thought the anti-hero we saw in book one would ever be the one fighting to save the planet? It just goes to show how much Artemis has developed and grown since the earlier books in the series - don't worry, though, he hasn't lost his edge.

I'm not going to talk much about the later events in the book, as I know everybody will want this review to be completely spoiler free, though I will say that it was a fantastic ending. Exciting, heartbreaking and warming in equal measure - I'm convinced that fans of the series will be so happy with how Colfer chose to end the series. It's perfect - and real - and that's what counts. Let me know if you make it all the way through with dry eyes - I'll be shocked!

This is simply an unmissable story, absolutely one of the most-hyped books of the year and it thoroughly deserves every bit of buzz it's been getting. Colfer has created one of the most magical and memorable series that I'm sure any of us has had the joy of discovering and I hope this wonderful finale delivers everything all of you hope - do let me know what you think once you've had the chance to read it.

First line: The Beserkers lay arranged in a spiral under the rune stone, looping down, down into the earth - boots out, heads in as the spell demanded.