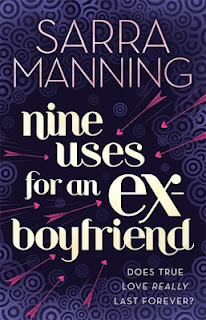 
She has red hair and a temper to match, as her mother is constantly reminding her. She can’t wear heels, is terrified of heights and being a primary school teacher isn’t exactly the job she dreamed of doing, especially when her class are stuck on the two times table.


At least Hope has Jack, and Jack is the God of boyfriends. He’s sweet, kind, funny, has a killer smile, a cool job on a fashion magazine and he’s pretty (but in a manly way). Hope knew that Jack was The One ever since their first kiss after the Youth Club Disco and thirteen years later, they’re still totally in love. Totally. They’re even officially pre-engaged. And then Hope catches Jack kissing her best friend Susie…


Does true love forgive and forget? Or does it get mad… and get even?

My review: The lovely Michelle over at Fluttering Butterflies posted about this one a few weeks ago and it inspired me to pick up my copy and see what her post was all about. She'd asked readers what they thought they would do in Hope's situation and reading everybody's answers was fascinating. Nine Uses for an Ex-Boyfriend (Nine Uses, from now on) definitely throws up a lot of questions and that's one of the things I like about it, there's so much potential for discussion and I think everybody will come away from the book with a different opinion about the situation, which is great.

I've read a few reviews that criticise Hope's behaviour throughout the book, that say she should have been more ballsy, less like a doormat, tried to get even and should never have wanted Jack back. Okay, the way I see it, it's easy to sit there and say how somebody should act, it's easy to say you want a strong female lead who doesn't let a man treat her like crap etc etc. Those are great ideals. But, unfortunately, the vast majority of the time they are unrealistic. If your boyfriend of over a decade, the man you love, the man you've built a home with cheats on you with your best friend, I'm pretty sure you're not going to get over it in an afternoon and display exemplary behaviour at all times. I'm pretty sure you're going to eat your weight in carbs, wallow in self-pity and and wonder what the hell you did to make him leave you, which is precisely what Hope does.

What I loved is how realistic Hope acted. I loved that she doubted herself, blamed herself at first but then slowly began to snap out of that mindset as she gradually tried to get over the relationship. I like that it was gradual, slow process, not just an overnight job like we've seen in countless movies. Sure, her behaviour can be frustrating but so are real people and I think Manning did a brilliant job at showing the various stages Hope goes through in her quest to get over the breakdown of her relationship.

A couple of things that did throw me were the title and blurb, which I thought were quite misleading. I'm still not sure what the title has to do with the story, except for the fact there is an ex-boyfriend involved. The whole 'Nine Uses' element seems completely redundant, as it's not something touched on in the story at all...unless I totally missed something. Did I? Was there a whole 'Nine Uses' sub-plot that completely passed me by? Similarly, I think the blurb was a bit off as well, particularly the teaser at the end of it that talks about true love getting mad and getting even. I went into the book thinking it would be about Hope getting revenge on Jack and Susie for betraying her but it's not something that happens at all. It just struck me as a little odd that the book was set up in the summary as being something it's not at all. These are more issues I had with the marketing side of things rather than the writing itself, which was great, as it always is with Sarra Manning.

Have any of you guys read this one? If so, what did you think? How do you think you would react in Hope's situation? Did you warm to Hope or were you frustrated by her behaviour? Let me know in the comments!

First line: 'It was obvious it wasn't the first time that Hope's boyfriend and her best friend had kissed.'