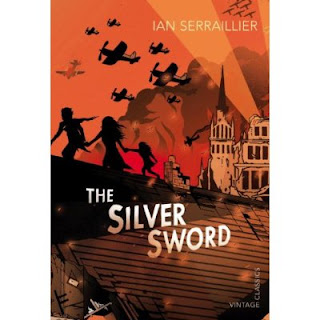 Summary (from the back cover): Having lost their parents in the chaos of war, Ruth, Edek and Bronia are left alone to fend for themselves and hide from the Nazis amid the rubble and ruins of their city.


They meet a ragged orphan boy, Jan, who treasures a paperknife - a silver sword - which was entrusted to him by an escaped prisoner of war.


The three children realise that the escapee was their father, the silver sword a message that he is alive and searching for them. Together with Jan they begin a dangerous journey across the battlefields of Europe to find their parents.

My memories (written before rereading): The first time I read The Silver Sword was back in 1997, as part of English literature classes when I was in year five at school. My school put a lot of emphasis on English literature and creative writing, which was more than fine by me, as you can imagine.

By the time I reached this age I was beginning to discover my own tastes and preferences and I'd decided before we even started that a 'war' book as not my kind of thing. It sounded boyish and boring and, to be honest, my main priority in life at ten years old was reading about ponies, specifically of the Brumby persuasion (anyone else adore the Silver Brumby series? Just me?).

However, by the time we were a few pages into the book I was captivated. I loved the story, the characters and the action and I flew through the book in my spare time, unable to wait for my next class to hear what happened next. I remember crying at least twice during the book, which caused me much embarrassment in the classroom. Though, as I recall, a fair few of us were blubbing by the end.

My review (written after rereading): Well, I can absolutely see why Vintage chose this one to be one of their launch titles. What a stunning, stunning book! I did have fond memories of this one from my childhood but the story had so much more of an impact on me this time round. I think my increased knowledge of history definitely helped me appreciate the story even more and I definitely won't leave it another fifteen years before I read The Silver Sword again.

The writing is simple but beautiful and it's so easy to see how Serraillier's wonderful story became a classic. You get such a wonderful sense of every character so soon after being introduced to them and I don't think I've ever rooted for characters so much in my life - it was reaching Viola and Todd proportions, people!

I'm a really big fan of using literature to teach children and this would fit in so seamlessly with any studies about the Second World War; it combines the history with the reality of how the war impacted the people involved and, while difficult to read at times, I couldn't tear my eyes away.

This is a book that will make you heart break and soar within the turn of a page and, whether or not you read this book as a child, I urge you to pick up a copy when it's released in August. You will absolutely not be disappointed but you will more than likely shed a few tears. I know I did.

First line: 'This is the story of a Polish family, and of what happened to them during the Second World War and immediately afterwards.'

Read if you liked…: Empire of the Sun - J. G. Ballard, The Boy in the Striped Pyjamas - John Boyne