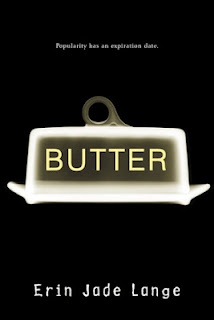 Summary (from Goodreads): A lonely obese boy everyone calls "Butter" is about to make history. He is going to eat himself to death-live on the Internet-and everyone is invited to watch. When he first makes the announcement online to his classmates, Butter expects pity, insults, and possibly sheer indifference. What he gets are morbid cheerleaders rallying around his deadly plan. Yet as their dark encouragement grows, it begins to feel a lot like popularity. And that feels good. But what happens when Butter reaches his suicide deadline? Can he live with the fallout if he doesn't go through with his plans?


My review: I pre-ordered Butter the day it became available on Amazon. As it's not out in the UK yet I had to go for the American hardback, the price of which made me gulp a bit. I didn't care, however, as after reading the synopsis for Butter I knew it would be one of those novels I had to have and had to have RIGHT AWAY. I waited impatiently for months. And months. Then I got an email from Amazon saying it would be dispatched two weeks earlier and was due to reach me in a couple of days. I did a little body pop of joy. Then it arrived. And I devoured it.

Butter isn't a book you can enjoy, per se, but I loved it. It was addictive, moving, well-written and impossible to ignore. It demands attention, from the cover to the synopsis and then the story itself. This isn't a happy story; it's dark and twisted and, at points, quite sickening. There are moments of comedy but it's sarcastic, biting comedy that just adds to the darkness of the story.

This book exploits the morbid curiosity that dwells within so many of us. Despite the fact I was reading about a teenage boy self-destructing to the point of suicide, it didn’t cross my mind to stop reading; I had to find out what happened, I had to find out whether he went through with it. I think Lange did a brilliant job at capturing a sense of mob mentality within the population of Butter’s school. I’ve seen people in a couple of reviews saying it was unrealistic, that there’s no way that would happen; I didn’t have a problem picturing it at all, unfortunately. We see the dark side of human nature in Butter, from the protagonist to his parents to his classmates. I thought it was interesting that Lange didn’t make Butter a target for bullies; the fact his size means he’s gone beyond that to people feeling too sorry for him to pick on him really stood out to me.

While Butter might not be bullied outright, bullying is an underlying theme in this novel. He might not have things thrown at him in the hallway but the bullying explored here is more insidious, disguising itself as friendship and support. And, to me, that’s the most dangerous type of bullying. Bullying can manifest itself in so many different ways and we see a lot of these touched on in Butter, including the different relationship Butter has with his mother and father. I think the way his parents react to his size so differently was wonderfully done and what I imagine to be so realistic.

I’m not going to discuss the ending here because obviously it’s such a crucial part of the story but I’ll be interested to see what people thought of it. If you have read Butter I really want to hear what you thought about the ending – please don’t post any spoilers in the comments but do drop me a message on Twitter because I need to talk about this book with someone!

In conclusion: Butter arrived at my house at approximately midday. By 4pm that afternoon I had finished it. So, take from that what you will. Also, there’s nothing like this book to make you inspired to do your 30 Day Shred workout, I can tell you!