Review: This Is So Not Happening - Kieran Scott 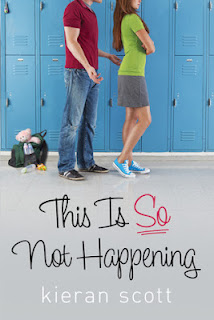 Summary (from Goodreads): After their long summer apart, Ally and Jake were hoping for a drama free senior year. Unfortunately, it doesn't look like things will work out that way...again. — It turns out that Chloe is pregnant and says that Jake is the father. Hammond is pissed at his best friend, but mostly can't believe that Ally would stay with Jake. But Ally is tired of being apart from Jake and is willing to make it work. But that is easier said than done when Jake starts blowing Ally off to go to doctor's appointments with Chloe and Ally joins the school play and meets a new cute guy.

But as graduation approaches, things get more complicated as new secrets come out and Ally realizes maybe Jake isn't the guy she thought he was. After everything they've been through can Ally and Jake get out of Orchard Hill with their relationship intact?

My review: We need more series like this in the world of YA. If I only had one sentence to sum up the He’s So/She’s So series that’s it. I’ve been a huge fan of these books ever since I received a review copy of She’s So Dead to Us and I’m genuinely sad this is the last book, though I’m glad the series ended so perfectly.

There’s a lot I could go into in this review, as I do think this is one of the best contemporary series out there, but instead I’m going to focus on the characters, who I think are the strongest element of the books. The cast Scott has created are so compelling she could put them in any situation and I’d pick up the books, regardless of the storyline.

Scott's characters are flawed and human and that's one of the reasons why I love this series so much. They're not perfect, they aren't one-dimensional archetypes. They act and talk and think like real teenagers who do make bad decisions and completely screw up on occasion. It's so refreshing to read about characters trying to clear up the mess left from an almighty shit storm they've advertently (or inadvertently) created.

We particularly see the exploration of mistakes and how to right past wrongs in this instalment. Here the stakes are higher than ever before and it’s a difficult and trying time for many of the characters within the Orchard Hill world. We see a very different side to Jake but, again, despite the fact he does act like a complete douche bag more than once, we get his motivation, we know that behind his façade is pain and confusion and fear and it’s because Scott’s writing helps us realise this that we understand what Jake is going through and see him as a whole person, rather than just a stereotypical perfect hero.

It’s not just Jake who goes through a huge journey in This Is So Not Happening but Ally and Chloe, too. I was never a particularly huge fan of Chloe (one of the only characters in the series who did feel a bit stereotypical as the ‘girl who has everything) but this installment completely changed my opinion of her. We see her fall from grace and, with the pedestal she was on in the first two books, it’s a long way to fall. As the story went on, though, I did find myself getting more and more endeared to her and I think changing a reader’s opinion of a character is the mark of a brilliant storyteller.

Honestly, I could read so many more installments of this series without getting bored and, although I will miss it, I’m glad Scott made the decision to end it where she did. I think it’s always better to end on a high than drag the story out over a few more books, just because it’s a popular series. We see that happen all too often in the world of YA but I’m pleased to see less and less contemporary series going in this direction.


Read if you liked…: The Ruby Oliver books – E. Lockhart

Labels: Kieran Scott, Review, This Is So Not Happening