***Spoiler warning - There are spoilers in this review, not detailed ones but definitely relationship spoilers and hints about the ‘mystery’ in the plot so don’t continue unless you’ve already read the book or don’t care about finding out the plot, because it is discussed. I also muse the things I don't want to be in the sequel, which also contain spoilers for what happens in this installment *** 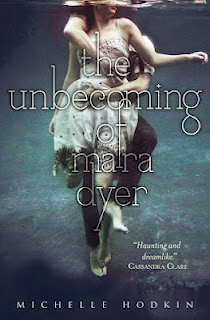 
Summary (from Goodreads): Mara Dyer doesn’t think life can get any stranger. She wakes from a coma in hospital with no memory of how she got there or of the bizarre accident that caused the deaths of her best friends and her boyfriend, yet left her mysteriously unharmed. The doctors suggest that starting over in a new city, a new school, would be good for her and just to let the memories gradually come back on their own.

But Mara’s new start is anything but comforting. She sees the faces of her dead friends everywhere, and when she suddenly begins to see other people’s deaths right before they happen, Mara wonders whether she’s going crazy! And if dealing with all this wasn’t enough, Noah Shaw, the most beautiful boy she has ever seen can’t seem to leave her alone… but as her life unravels around her, Mara can’t help but wonder if Noah has another agenda altogether…

Review: The Unbecoming of Mara Dyer is built on relationships. And it felt as though the romantic one was the least important, which I wanted to hug Hodkin for. Particularly towards the end of the book, Mara does have intense feelings for Noah but she doesn’t cut out her family and friends for him. And he doesn’t expect her to, which is even better.

Mara’s relationships with those around her were my favourite part of the book. I loved the connection between her and her older brother, Daniel. He was one of the strongest characters and I really got a clear picture of him in my head, pretty much from the outset; I really hope we see more of him in the second instalment.

The ending of The Unbecoming of Mara Dyer has been talked about a lot across the blogs and review sites and I have to agree, it is a major cliff hanger that lets us know what the focus is going to be in the second book. I liked the ending, though. It did raise a lot of questions but just as many were answered leading up to that point, so I was satisfied. Although I really can’t wait to get my hands on the sequel to find out what the hell is going on.

These are the things are really hope aren’t in the sequel:

Just those things. That is all. Because I love that this is actually paranormal but still reads quite like a contemporary. There is an all-encompassing love story and it is a little quick off the ground but I like that Hodkin does make it clear Mara’s initial attraction to Noah is lust and not love. It’s only after they spend time together and get to know each other that Mara’s feelings deepen, which I appreciated. Of course, it wasn’t quite at the realistic speed you would find outside a novel but with the story’s fast pace and limited time frame I understand why the love story panned out the way it did.

When Mara and Noah do first start to get closer I did start to get a bit worried things were going to descend into a standard paranormal romance relationship of doom but, luckily, that didn’t happen. Things got a little bit over the top from both Noah and Mara at points but then the mysteries of the plot would take over and their relationship would be put on the backburner, which saved things from getting a bit too predictable romance-wise.

I did like Noah as a character, though I didn’t love him. He was bad boy enough to be intriguing but had depth beyond the standard bad boy love interest. I liked the way he didn’t try to change Mara, or take over her life, or watch her sleep… Though, there does seem to be a bit of a trend of late for English male leads in US novels. That’s all well and good as I love spot of home grown hotness but they seem to be come with two accents and speech patterns: Dick van Dyke or Royal Prince. Noah definitely falls into the Royal Prince school of speech and unfortunately it did take me out of the story every time I came across a turn of phrase that sounded disjointed and, well, the sort of unrealistic ‘fake posh’ that always makes me chuckle when I see it on TV. But, yes, just a small quibble as I did like him a lot more than most paranormal romance heroes, that’s for sure.

The Unbecoming of Mara Dyer wasn’t quite the book I thought it’d be. Not that it disappointed me, just that I thought it was going to be less paranormal than it actually was. Surprisingly, though, I did enjoy the paranormal elements and, for once, the love story didn’t make me throw up in my mouth. Which is a major plus. Kudos, Michelle Hodkin, I can’t wait for book two.