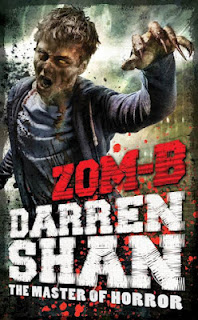 Published: September 27th 2012, Simon & Schuster
Pages: 217 pages, hardback
Series?: Yes, this is book one of a whopping twelve part series. Book two (Zom-B Underground) is due out in 2013.
Acquired: Kindly sent for review by the publisher

Summary (from Goodreads): Zom-B is a radical new series about a zombie apocalypse, told in the first person by one of its victims. The series combines classic Shan action with a fiendishly twisting plot and hard-hitting and thought-provoking moral questions dealing with racism, abuse of power and more. This is challenging material, which will captivate existing Shan fans and bring in many new ones. As Darren says, "It's a big, sprawling, vicious tale...a grisly piece of escapism, and a barbed look at the world in which we live. Each book in the series is short, fast-paced and bloody. A high body-count is guaranteed!"

My review: Once again, Shan has hit a home run and proved that he truly is the master of YA horror. I had exceedingly high hopes for Zom-B and I’m pleased to say that Shan completely outdid himself with this one.

I’ve been lamenting the lack of horror in YA for years, especially after the paranormal romance boom meant classic creepy creatures were being turned from monsters into love interests. Thankfully, though, we have incredibly writers like Darren Shan (and Chris Priestley, Jonathan Maberry and Andrew Fukuda, among others) holding up the fort and producing stellar horror stories.

One thing Shan has never shied away from is gore and this is entirely true of Zom-B. The opening scene made me gag a little bit and there were certain descriptions and turns of phrase later on in the book that made me wince…in a good way. I should probably pretend to be responsible and say this might not be suitable for younger readers because of the content blah blah blah but it’s a brilliant, entertaining and well-written story so, really, I wouldn’t want any keen readers to have to miss out on this because of a little bloodshed.

While Zom-B is about, well, zombies (obviously), it also has a very intriguing subplot about B’s racist father. B, our protagonist, is torn between familial loyalty and wanting to do the right thing and it’s so interesting to watch B's character development and journey from beginning to end, as B is certainly a very different person by the end of the novel.

One of Shan’s strengths is the way he is able to depict teenagers so realistically. His teenage voice is always spot on and it never feels forced, as though it’s an adult trying to sound like a teenager. The characters in Zom-B are particularly strong and I thought B’s narrative voice was spot on. Unrealistic voice is something I’ve had a few issues with in some of the latest YA I’ve read, so it was lovely to settle back into something familiar and entertaining, like Shan’s writing style.

Something you may have read about in other reviews is the twisting and turning plot of Zom-B. There are a couple of huge twists in the story and, no, I’m not going to give you a single hint. To be honest, it’s silly to try and even figure out the twists because they’re all absolute blinders that I guarantee you will not see coming. I certainly didn’t and I loved that I had no idea what the final reveal was going to be. What I will say, though, is that it was ridiculously smart and made me look at everything in a completely different light.

First line: 'It was the darkest, most wretched hour of the night when the dead came back to life and spread like a plague of monstrous locusts through the village of Pallaskenry.'