Hi everybody, I've been working my way through a huge stack of books lately, in an attempt to catch up and get my TBR pile under control so I can start 2013 afresh. for today's installment of Mini Review Madness I'm going to be taking a look at the following books: Hold On (Alan Gibbons), Grymm (Keith Austin) and Shift (Kim Curran). As I have 51 books to review before the end of the year I thought it would be fitting to write mini 50 word reviews of each book, just to give you a taste of my thoughts. 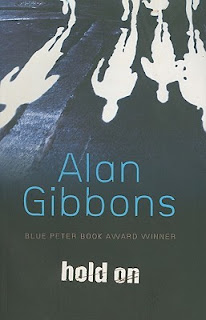 Summary (from Goodreads): When Annie returns from an extended stay in Canada, she discovers that her friend John has killed himself. Annie is devastated by his death and is determined to confront those she believes responsible—a group of boys from her school, who bullied John mercilessly in the months before he died. But Annie's parents and friends don't share her wish to bring the boys to justice. She finds herself treading a lonely path—and soon discovers that nothing is straightforward. She is helplessly attracted to one of the boys, and when she reads John's diary, it's clear they weren't the only ones to cause him so much unhappiness. The novel tells John's story as a tragic waste of a young life in an unsentimental and compassionate way, but also tells Annie's story about moving on and looking towards the future.

My 50 word review: Alan Gibbons can always be counted on to deliver a wonderful contemporary story that leaves the reader with a lot of thinking to do afterwards. He's done it again with Hold On - I definitely recommend this one to contemporary fans. And yay for the Florida references!

Summary (from Goodreads): Something stirred in the gravelly yard beneath their window . . . A soft slippery nuzzle, the sort of sounds you'd expect a pig to make with its snout in a trough . . . The small mining town of GRYMM perched on the very edge of the Great Desert is the kind of town you leave - but when Dad gets a three-month contract in the mine there, Mina and Jacob, unwilling stepbrother and sister, are reluctantly arriving.

From a grotesque letting agent who seems to want to eat their baby brother, a cafe owner whose milkshakes contain actual maggots and the horribly creepy butcher, baker and candlestick-maker, Mina and Jacob soon realize that nothing in GRYMM is what is appears to be. And then things get seriously weird when their baby brother disappears - and no one seems to even notice! In Grymm, your worst nightmares really do come true . . .

My 50 word review: Grymm started off so strong but unfortunately it did start to lose its way during the middle section - it's a good story but I think 50 or so pages could have been cut from the middle to speed things up a bit. I was a little disappointed as I had high hopes for this one. Worth a read, though. 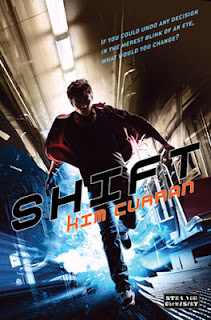 Summary (from Goodreads): When your average, 16-year old loser, Scott Tyler, meets the beautiful and mysterious Aubrey Jones, he learns he's not so average after all. He's a 'Shifter'. And that means he has the power to undo any decision he's ever made. At first, he thinks the power to shift is pretty cool. But as his world starts to unravel around him he realises that each time he uses his power, it has consequences; terrible unforeseen consequences. Shifting is going to get him killed. In a world where everything can change with a thought, Scott has to decide where he stands.

My 50 word review: The premise of this one reminded me a little of the movie 'Jumper' and it was just as much fun. A well-written sci-fi romp that is perfect for male and female readers. A solid debut!