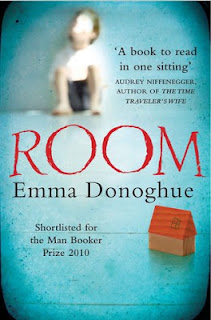 Summary (from Goodreads): To 5-year-old Jack, Room is the entire world. It is where he was born and grew up; it's where he lives with his Ma as they learn and read and eat and sleep and play. At night, his Ma shuts him safely in the wardrobe, where he is meant to be asleep when Old Nick visits.

Room is home to Jack, but to Ma, it is the prison where Old Nick has held her captive for 7 years. Through determination, ingenuity, and fierce motherly love, Ma has created a life for Jack. But she knows it's not enough---not for her or for him.

Told entirely in the language of the energetic, pragmatic 5-year-old Jack, ROOM is a celebration of resilience and the limitless bond between parent and child, a brilliantly executed novel about what it means to journey from one world to another.

My review: I bought Room soon after it was shortlisted for the Booker Prize, as I'm sure many others did. I didn't know much about the story and it ended up sitting on my shelf until a friend told me how much she was enjoying it last week. I've been going through a bit of a reading slump lately so thought I'd give it a go as it's very different to a lot of what I've been reading lately.

Boy am I glad I listened to my pal - Room is an extraordinary novel and one of the most exciting and unique books I've picked up all year. It's definitely one I'd recommend to any reader; even if you're not the biggest fan of adult fiction this is honestly a book you need to make room for on your shelves.

Our narrator, Jack, is a sparky five year old boy who has spend his entire life in Room, a single room that he shares with his mother. It is their bedroom, bathroom, kitchen and school room. Jack has never been outside, never met another child and, as far as he is concerned, his entire world is contained within Room, which plays such an important part in the novel it becomes almost a secondary character.

The only other people Jack sees are those on the screen of the small TV they have and glimpses of Old Nick, his mother's captor and his father. Old Nick isn't a character we see a lot of directly, though he is frequently referenced and is a constant presence in Jack and his mother's life. He's a fascinating but horrific character and, although it would have been interesting to learn more about his psyche I'm glad we focused on Jack and his mother rather than Old Nick, as I found him pretty darn terrifying...which was obviously the point.

Donoghue is such an interesting writer and I love the decision she made to tell the story from Jack's point of view rather than his mother's. It gave the story a completely different feel and made me think about things I probably wouldn't have considered if Jack's mother was the narrator. Seeing some of the actions his mother undertook to try and keep the pair of them safe, alert and healthy was heartbreaking and I found myself thinking about Room constantly whenever I had to put it down.

Room is a wonderful, emotional novel that will make you see your own life and freedom in a new light. This is a book I want to talk about and urge other people to read. It's made me grateful for little things I know I often take for granted and, now Room is safely back on my shelf with a very creased spine, I'm keen to try some of Donogue's other books in the future.