Today I've got urban fantasy author Suzanne Johnson here at Writing from the Tub to let you in on some secrets about the characters in her 2012 release, River Road. I haven't read the book myself but I love finding out more about a writer's process and how they bring their characters to life so I had a great time reading the guest post and learning about the characters Suzanne has created.

And now I'll hand you over to Suzanne. 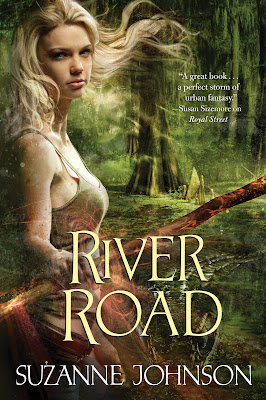 Dishing the Dirt on the Characters of River Road

Think you know everything about the characters in your favorite books? I guarantee you, the sneaky authors of those books are keeping secrets. Sometimes it might be some kind of background detail that wasn’t important enough to include in the books. Sometimes, the right moment to reveal it hasn’t presented itself yet.

I’m no exception, and all of the characters in my Sentinels of New Orleans series are holding onto a few secrets (well, besides all those secrets they’re keeping from the humans who live around them in South Louisiana). But I’m feeling like a Gossip Girl today, so here are a few things you might not know.

DJ Jaco, Green Congress wizard and Co-Sentinel of the New Orleans region. DJ’s job is to help protect the borders between modern New Orleans and the world Beyond and keep the preternaturals under control. Did you know DJ refuses to eat soft-shell crab, a Louisiana favorite, because her mentor ordered it for her at a restaurant once time as a kid and she was traumatized at having to rip the crab’s legs off? She still has a few queasy issues with dismemberment, now that I think about it.

Alex Warin, Co-Sentinel of the New Orleans region and Enforcer for the wizards’ Congress of Elders. We all know Alex is a big, tough guy who likes to shoot things. Did you know that Alex’s first name, taken from a Cajun uncle on his mom’s side of the family, is Basile? (Don’t tell him I let it slip; he hasn’t even told that one to DJ.)

Jake Warin, Enforcer trainee, wizards’ Congress of Elders, and owner of the Green Gator Bar in New Orleans’ French Quarter. We all know Jake’s a former U.S. Marine injured in Afghanistan, but did you know that he ran track in college at Ole Miss?

Jean Lafitte, early 19th-century French-born pirate and now a member of the historical undead, is New Orleans’ most famous citizen, of course. But did you realize that Jean spelled his name differently than history has spelled it? Quite a few handwritten and signed documents from him still exist, and he clearly spelled his name Jean Laffite—when and how it got changed to Lafitte, I’m not sure. His brother Pierre also favored the Laffite spelling.

Rene Delachaise, the merman who heads the Delachaise clan of merpeople in Plaquemines Parish, Louisiana, just southeast of New Orleans. Rene is a shrimper and owns his own trawler, but did you know he and his brother Robert are one of two sets of twins in his family? He has older brothers named Claude and Cheney, and a twinless older brother, Toussaint Jr., aka “Son.”

So there you have it—a few secrets of the characters of Royal Street and River Road! Of course, I have some MAJOR secrets I can’t tell yet…stay tuned.

Thank you, Suzanne, for taking the time to stop by at Writing from the Tub! To learn more about Suzanne and her books you can check out her website here.
Posted by CarlyB at 06:00