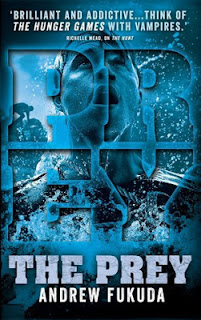 Summary (from Goodreads): For Gene and the remaining humans—or hepers—death is just a heartbeat away. On the run and hunted by society, they must find a way to survive in The Vast... and avoid the hungry predators tracking them in the dark. But they’re not the only things following Gene. He’s haunted by the girl he left behind and his burgeoning feelings for Sissy, the human girl at his side.

When they discover a refuge of exiled humans living high in the mountains, Gene and his friends think they’re finally safe. Led by a group of intensely secretive elders, the civilisation begins to raise more questions than answers. A strict code of behaviour is the rule, harsh punishments are meted out, young men are nowhere to be found—and Gene begins to wonder if the world they’ve entered is just as evil as the one they left behind. As life at the refuge grows more perilous, he and Sissy only grow closer. In an increasingly violent world, all they have is each other... if they can only stay alive.

My review: Any regular readers of Writing from the Tub will know that The Hunt was one of my favourite books of 2012. I completely fell in love with Fukuda's writing style and the way he's made vampires back into the bad guys in the most horrific way possible. I was obviously excited to read The Prey but nervous it might not live up to the original, particularly being the notoriously difficult second book in a series.

Luckily, The Prey is triumphant. Possibly even better than The Hunt. Either way, it's incredible.

Gene, Sissy and the boys are back and fighting for survival against the vampires that are desperately hunting them. The action is rife from the very first chapter and one of Fukuda's main strengths is the atmosphere he can build up through his words. Some scenes are so nerve wracking the tension is palpable and I honestly can't think of any other series that so seamlessly weaves horror and action together.

The Prey delves further into the mythology that was hinted at in book one and I was seriously impressed with the history behind the vampires. It's definitely an original take on things and I loved the origin story. With vampires so frequently written about in YA it made such a lovely change to hear a unique perspective on vampires and how they came to be. It just goes to show that vampires can still be wonderfully terrifying monsters when in the hands of the right author. There's hope yet!

We continue to be treated to some horribly gruesome scenes that made me want to retch and cheer all at the same time. The Prey is such an exciting adventure and the pacing was excellent - I loved the mixture of heart-racing action and quiet, reflective scenes that really help us get to know the characters, particularly Gene, who I just love more and more as this series progresses. He's the perfect hero; a little reluctant but always noble and definitely more than capable of kicking serious ass. What more could you want?

This series has gone from strength to strength and I cannot wait to get my hands on the final installment. I have no idea where the story is going but I love the mystery and Fukuda has absolutely nailed the perfect cliffhanger. Absolutely recommended to anybody who loves a bit of horror or action, or any of you whose New Year's Resolution is to step outside your comfort zone.


First line: 'We thought we were finally free of them but we were wrong.'

Read if you liked…: The Hunt - Andrew Fukuda, I Am Legend - Richard Matheson