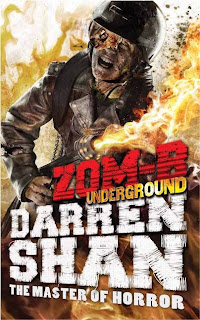 ***Please note: This is a review of the second book in the series, so if you haven't read book one there may be spoilers. Proceed with caution***

Summary (from Goodreads): Waking up in a military complex, months after zombies attacked school, B has no memory of the last few months. Life in the UK has turned tough since the outbreak, and B is woven into life- and battle- in the new military regime quickly. But as B learns more about the zombies held in the complex and the scientists keeping them captive, unease settles in. Why exactly was B saved? And is there anyone left in the world to trust?

My review: I’ve been a long time fan of Darren Shan’s writing. I remember picking the first few titles from the Vampire’s Assistant series when I was at the beginning of my university days and devouring them. He’s the undisputed master of teen horror and the Zom-B series is Shan at his absolute horrifying best.

I read and loved Zom-B, the first book, last year so feel free to take a look at my review here, if you are so inclined! After enjoying Zom-B so much I was hoping the second installment, Zom-B Underground, would be just as enjoyable and I’m really excited to say this one is even better and bloodier than book one. Isn’t it brilliant when a series just gets better and better?

In Zom-B Underground we learn a lot more about the zombies and how they came to be, as well as getting an insight into how the country is dealing with the outbreak, though I’m sure this is going to be explored in a lot more depth in further installments. The potential for this series is phenomenal and I’m so excited to see what Shan does with the next ten books. There’s so much scope for the Zom-B series to explore the origin and ongoing effects of the zombie outbreak and Shan does hint at this in Zom-B Underground.

B goes from strength to strength and really grows as a character throughout this installment, an admirable feat of writing when you consider just how much B changed in book one alone. To compare the moral, heroic B we see in Zom-B Underground to the sullen, angry teen in Zom-B just goes to show how fantastic Shan is at characterisation.

Aside from B we are introduced to a few new characters in Zom-B Underground, who are some of the most memorable figures I’ve come across in a while, especially Josh and Rage. They may not be the most pleasant characters but you sure as hell won’t forget them in a hurry. One of Shan’s greatest strengths is creating believable, flawed characters and this is certainly true for the cast of Zom-B Underground.

I absolutely can’t mention characters without touching on Mr Dowling, who is one of the most utterly horrifying creations in YA horror. I won’t reveal too much about him but he’s the complete embodiment of everybody’s childhood fears. I like to think of myself as a hardened horror fan (though I love a good scare) and, gee whizz, he freaked me out.

Despite only being two books in, the Zom-B series has become known for its twists and surprise revelations throughout the story. The twists in Zom-B will BLOW YOUR MIND and I wasn’t sure that anything in Zom-B Underground would be able to shock me as much. However! While the ending of Zom-B Underground isn’t as much of an outward surprise as book one it really stayed with me afterwards and I love the choices that Shan made.

The ending of this one felt so filmic; it’s completely different but it reminded me of how I felt the first time I watched the ending of Saw (yes, the franchise went to shit but the first one is still brilliant). I thought I knew where things were going, I thought it was a well-executed but fairly run of the mill horror and then OMG HUGE GIANT CURVEBALL. EPIC MUSIC. DRAMA. WHAT IS GOING ON? And that is also how I felt at the climax of Zom-B Underground. All it needs is some epic music played over the top (I’m thinking Clubbed to Death?) and you have yourselves a book blockbuster, folks.