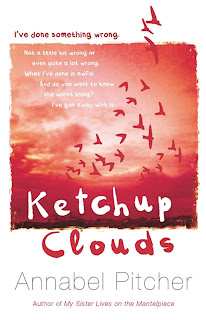 Summary (from Goodreads): Secrets, romance, murder and lies: Zoe shares a terrible secret in a letter to a stranger on death row in this second novel from the author of the bestselling debut, My Sister Lives on the Mantelpiece.

Fifteen-year-old Zoe has a secret—a dark and terrible secret that she can't confess to anyone she knows. But then one day she hears of a criminal, Stuart Harris, locked up on death row in Texas. Like Zoe, Stuart is no stranger to secrets. Or lies. Or murder.

Full of heartache yet humour, Zoe tells her story in the only way she can—in letters to the man in prison in America. Armed with a pen, Zoe takes a deep breath, eats a jam sandwich, and begins her tale of love and betrayal.

My review: I think I'm pretty much the only person who hasn't read Annabel Pitcher's acclaimed debut, My Sister Lives on the Mantelpiece. I will get around to it one day, I promise, as it does look wonderful and I haven't seen a single bad review. Despite the fact I hadn't read anything of hers before, I pounced on Ketchup Clouds as soon as a (beautifully-wrapped) proof arrived at my house shortly before Christmas.

I was only a few pages in when I realised that Pitcher is a unique talent in the world of YA. Her style is wonderful and I love how she manages to make even the most mundane actions sound beautiful with her flowing prose and gorgeous images. Ketchup Clouds was an absolute delight to read, partly because of the story but partly because I loved Pitcher's style of writing and storytelling so much. This might be the first book of hers I've read but I will absolutely be following her career to wherever it progresses from here.

One of the highlights in Ketchup Clouds is the representation of family life within the story. Pitcher touches on a number of struggles that so many families face every day and it was lovely to see a more hands-on family in YA, as parents are so commonly removed from the scene. Zoe's little sister was absolutely adorable!

At the centre of Ketchup Clouds is one of the most interesting mysteries that I've come across in YA. I won't go into it too much as I don't want to give away any details but it kept me intrigued until the very end. Speaking of which, I think the ending is fantastic. I always like to see a realistic ending rather than a Hollywood one, so I'm really pleased with how Pitcher closed off the story.

What really sets Ketchup Clouds apart from anything else I've read before is the structure of the novel. It's epistolary (which I love) and the recipient of Zoe's letters is Stuart Harris, who is on death row in America, charged with murdering his wife. This brought an entirely different element to the story and I love how Pitcher revealed important information in dribs and drabs through the letters, mixing in shocking events with Zoe's day to day ramblings. Seeing the details of Zoe and Stuart's respective crimes muddled in with discussions about boys and school made the subject matter of Ketchup Clouds jump out even more.

If you haven't read Ketchup Clouds or My Sister Lives on the Mantelpiece yet - what are you still doing here? Go on, off you hop to pick one up!
Posted by CarlyB at 16:33