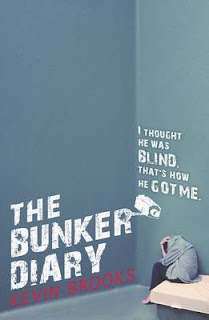 Summary (from Goodreads): Room meets Lord of the Flies, The Bunker Diary is award-winning, young adult writer Kevin Brooks's pulse-pounding exploration of what happens when your worst nightmare comes true - and how will you survive?

I can't believe I fell for it.

It was still dark when I woke up this morning.

As soon as my eyes opened I knew where I was.

A low-ceilinged rectangular building made entirely of whitewashed concrete.

There are six little rooms along the main corridor.

There are no windows. No doors. The lift is the only way in or out.

What's he going to do to me?

What am I going to do?

If I'm right, the lift will come down in five minutes.

It did. Only this time it wasn't empty...

My review: I try not to rave about every single book I review as I know my opinion won't count for much if every single book I mention is 'OMGZ AMAAAAZE'. I do always try to give a balanced view and touch on both the good and the bad but, in the case of the occasional book, I cannot do anything other than rave. And The Bunker Diary is absolutely one of those books.

I've been a fan of Kevin Brooks for a while now and I've loved everything of his that I've read so far. However, nothing has affected me quite as much as The Bunker Diary. The second I received a press release I knew I had to read it. The premise completely grabbed me and I knew that if anybody could pull off such a bold story it would be Brooks, who is a master when it comes to atmosphere and tension.

As other reviews have mentioned, this is an incredibly difficult book to review as the beauty of this one lays in the twists and turns that the reader discovers at the same time as Linus, our protagonist. I'm going to keep this spoiler-free and please, please take my advice and go into this one knowing as little as possible because, I promise, your jaw will be on the ground.

The Bunker Diary is a terrifying look at abduction, yes, but most of the horror doesn't come from the nameless person co-ordinating the attacks but the delicate society that forms within the bunker itself. The tension is on a knife edge at all times and I couldn't relax for a second, knowing that the wrong word or look from anybody could cause absolute chaos for Linus. The nod to Lord of the Flies in the summary is wholly accurate and, like in Golding's classic, anarchy never feels more than a heartbeat away.

I know the lack of information about the abductor may get to some people but, for me, it made the book even scarier. The unknown is what affected me in this book. The fact it could be anybody? That's really terrifying.

I love a good ending, I'm sure any regular readers of this blog are aware of this. I also tend to dislike a Hollywood ending. I like a shocker. I like excitement, I like twists and I love open-ended endings. I'm not going to say a single thing about the ending of The Bunker Diary except that it is absolutely incredible.

Kevin Brooks is a genius, he 100% deserves his reputation as a master of YA, and that's all there is to say.

First line: 'This is what I know.'