For me, Gloss might just be one of the most exciting releases of 2013. Set in New York in 1963, it follows four young girls who are interning at Gloss, a huge American fashion magazine. The 1960s is so rarely touched on in YA that I think it's going to be something a little bit different, which is always a good thing. Plus, fashion in YA? Yes, please.

For today's slot on her blog tour I've got the author of Gloss, Marilyn Kaye, here at Writing from the Tub to talk about fashion in the 60s and some of the looks that are central to Gloss. For some visual inspiration and to check out some of the looks head over to the Gloss Pinterest board, which you can see here.

If you enjoyed today's post make sure you head over to A Dream of Books tomorrow, when the next stop on the tour will take place.

Anyway, without further ado, let me hand you over to Marilyn: 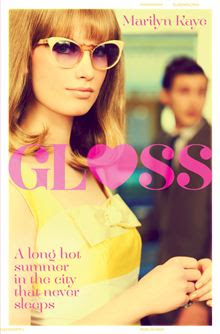 When people think of fashion in the 1960s, there are two images that usually come to mind.  One is the look that involved miniskirts and short white go-go boots.  The other is the hippie look – long skirts, peasant blouses, beads and flowers.

But for the year in which GLOSS is set, 1963, neither of these were popular yet.  The fashion icon was the First Lady, Jacqueline Kennedy.  She wore softly tailored feminine dresses, straight n-waist dresses called ‘shifts,’ and suits that featured short boxy jackets with big buttons and skirts that came to the middle of the knee or just below.  Pillbox hats and short gloves for day.  Evening wear was glamorous – full skirted gowns, and long gloves.  Hair was teased up softly into poufy bouffant styles.

Teens had their own special variations on the look.  They too wore dresses, and the most popular label was Villager.  A typical Villager dress was a solid color or small  print, sometimes with tucked with a tuck front, an A-line skirt, and a matching belt.  Other popular brands were Bobbie Brooks – especially their dyed-to-match skirts and cardigans – and Ladybug (every shirt came with a tiny red and black ladybug pin on the collar.)  The It-bag was by John Romain – tweed, with cordovan or navy blue leather trim, and the favored shoes for day were loafers (preferably a brand called Weejuns) with bare legs.  If the weather was too cold to go bare-legged, they wore nylon stockings held up by garter belts or girdles.  Trousers were only for play, never worn at school.

Hair was teased up pageboy or flip styles – the only real difference was that in the flip style, the ends of the hair were flipped up.  And there was a shorter poufy style called a ‘bubble.’  Girls rolled their hair, sometimes nightly, with big fat bristled rollers and bobby pins and slept on it that way – unbelievably uncomfortable, but worth it to have the look.

And in the morning, once the hair was teased and arranged, it was kept in place with a heavy dose of Aqua Net hair spray, which was actually a lacquer – it would take a hurricane to push one lock out of place!