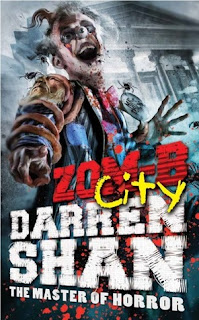 Zom-B City - How many survived the zombie apocalypse?Where do the living hide in a city of the dead?

Who controls the streets of London?

B Smith is setting out to explore...

Zom-B Angels - After spending the last few months wandering around London--a city filled with the dead--B Smith has given up hope for any sign of normal human existence. But then B finds strange signs all over the city--a "Z" plus red arrows. Following them, B finds The Angels-- a group gathered in the hopes of combating the evil dead and the forces that introduced them. But all is not as it seems and it's up to B to find out: what battle are they truly waging? 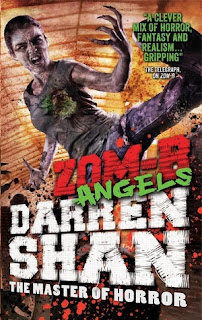 My review: Any regular readers of Writing from the Tub will know what a huge Darren Shan fan I am and how much I've been loving the Zom-B series so far. I flew through the first two books and was so excited to receive copies of books three and four, which I read in succession, so this is going to be a double review of both Zom-B City and Zom-B Angels!

The Zom-B series just gets stronger and stronger with every book; we see the characters developing into three-dimensional beings you can't help but be charmed and intrigued by - or completely repulsed by, in some cases! The setting changes in each book and every time it's wonderfully brought to life and I feel completely immersed in the world. In Zom-B City the setting is Central London and there are so many subtle details that really made me feel as though I was travelling through a zombie-infected London alongside B, our protagonist. In Zom-B Angels the setting is a little more specific but still just as vivid; I genuinely don't know how Shan manages to produce book after book of such consistently great storytelling. There's been no low in the Zom-B series so far, NO LOW. It's incredible.

B is such a complex character who continues to grow and grow with every installment of the series. A quick look back at the beginning of Zom-B shows you just how far B has come already and I can't wait to see what new things are in store in the upcoming books. Although the central focus of the series is the zombie outbreak there are so many true to life issues that are tackled in the books and Shan manages to handle them delicately and with grace, in the midst of a blood-thirsty zombie series - it's quite a feat!

The Zom-B books are just so compelling; fresh and funny and unlike anything else that is being released for teens today. Shan doesn't shy away from the grotesque, whether it's a bloody-thirsty zombie attack or some home truths that we all may be guilty of from time to time, everything he says feels honest and I know teen readers will appreciate that he never patronises or talks down to them.

The mythology in Zom-B Angels puts such an interesting spin on things and has made me question everything I thought I knew up to this point; Shan has done a fantastic job at keeping the pace of the series up and slowly letting more and more information trickle through to help readers get an idea of the bigger picture. Maintaining action and adequate momentum for a spam of twelve books has got to be a huge challenge but the excitement, gore and mystery just builds and builds with every installment.

I cannot wait to get my hands on Zom-B Baby and see what horrors Shan comes up with next!