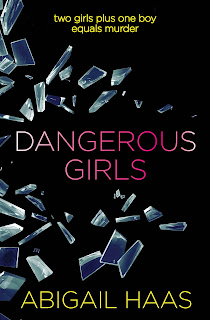 Acquired: Kindly sent for review by the publishing house

Summary (from Goodreads): It's Spring Break of senior year. Anna, her boyfriend Tate, her best friend Elise, and a few other close friends are off to a debaucherous trip to Aruba that promises to be the time of their lives. But when Elise is found brutally murdered, Anna finds herself trapped in a country not her own, fighting against vile and contemptuous accusations. As

Anna sets out to find her friend's killer; she discovers hard truths about her friendships, the slippery nature of truth, and the ache of young love.

As she awaits the judge's decree, it becomes clear that everyone around her thinks she is not just guilty, but dangerous. When the truth comes out, it is more shocking than one could ever imagine...

My review: If you're after a sultry summer read that will knock you sideways with twists, turns and an unforgettable climax then look no further, Dangerous Girls is your perfect summer read.

Set in beautiful Aruba, Dangerous Girls is the story of a group of friends who are ready for the Spring Break of their lives... only instead of cocktails, adventure and a little romance on the side they find out nobody in the group is quite who they thought, when lies and deceit come together to a horrifying head and one of the group is found murdered in their villa.

Beginning with a transcript of the emergency services call the group make after the disappearance of their friend, Elise, Dangerous Girls hooks you in from the first sentence and digs its claws in deeper and deeper as you turn every page. I couldn't tear myself away and raced through it in two sittings, desperate to find out who the murderer was.

The book is told partially through flashbacks and partially through our protagonist Anna's internal monologues as she sits in a prison cell, waiting to be tried for the murder of her best friend, Elise. Despite protesting her innocence Anna's pleas fall on deaf ears and we discover more and more about the case as the book develops, from the bail hearings to the trial itself and the events that led up to the murder, told through flashbacks. Mixed narrative forms keep the fairly lengthy story feeling fast-paced and fresh, with television transcripts, newspaper articles and website features cropping up throughout the book. I'm a huge fan of mixed media like this and it works perfectly in Dangerous Girls to show the media circus not only in the story but also physically on the pages of the book.

There's a lot of food for thought in Dangerous Girls and I found myself questioning my own actions as I was reading. Anna's entire online presence is dissected and used against her as the murder case progresses - innocent blood-splattered Halloween outfits are twisted into something dark and menacing and messages and Tweets are scrutinised for any sinister meaning - what could people find if they searched through your social media profiles? I'm pretty sure there are enough suspect pictures of me to weave a pretty interesting tale!

I'm going to be purposely vague about the murder mystery element of Dangerous Girls because spoilers are going to be your worst enemy with this one - basically, the denouement is awesome and it will blow your mind. That is all I'm going to say about it.

Dangerous Girls is my read of the summer so far, the perfect blend of gorgeous scenery, mystery and unexpected turns at every point; you need this book in your life!