Hello hello my dears - it's Friday, we made it! Today I'm taking part in the blog tour for Romily Bernard's debut novel, Find Me, which was released by Simon & Schuster yesterday. In case you haven't heard about this one yet I'll pop the summary underneath this intro so you can have a read. 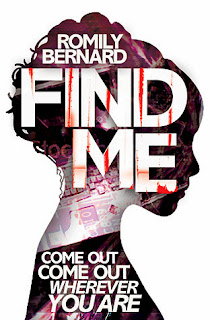 Summary (from Goodreads): A girl is dead…
A killer’s closing in…
And two little words are the only clue…
“Find Me”.

These are the words that Wick Tate finds in Tessa Wayne’s diary. And now Tessa has been found … dead. Does someone out there really expect Wick to uncover the truth about her death?

An expert computer hacker, Wick has the skills for the job, but with the threat of her ex-con dad returning, the detective hunting him sniffing around and new foster parents to keep happy, getting involved with a murder case is the last thing she wants to do. Until her little sister, Lily, is the next target.

Foster child. Daughter of a felon. Loner hacker-girl. Wick has a bad attitude and sarcasm to spare. And now she’s going to find this killer, no matter what it takes. Because it just got personal.

So for today's stop on the blog tour I've got two great videos from Romily to share with you. One is a teaser about the book and one is, of course, a blooper reel - because who can film a video without screwing it up a zillion times? I know I can't. So have a watch below to learn more about Find Me and just try get to the end without wanting to order a copy - I bet you can't.


And now, onto the blooper reel:


I want to say a huge thank you to Romily for taking the time to film these videos for the blog tour - after watching them I'm more excited about the book and I hope you guys are too, what do you think?