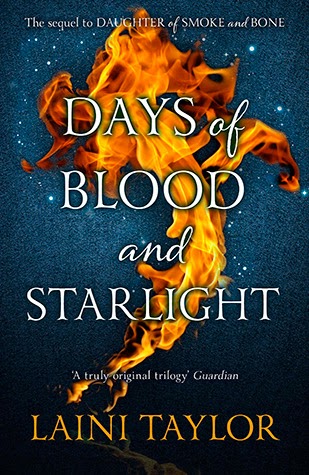 Summary (from Goodreads): Once upon a time, an angel and a devil fell in love and dared to imagine a world free of bloodshed and war.

This is not that world.

Art student and monster's apprentice Karou finally has the answers she has always sought. She knows who she is—and what she is. But with this knowledge comes another truth she would give anything to undo: She loved the enemy and he betrayed her, and a world suffered for it.

Story: Days of Blood and Starlight picks up shortly after the stunning climax of Daughter of Smoke and Bone. After the destruction at the end of the first book, we see Karou trying to pick up the pieces of her former life and balance the rage and grief that are both fighting for power inside her.

Taylor gives us an action-packed story that absolutely smashes the 'second novel in a series' myth. This is even more exciting than book one and is a fantastic book in its own right - this is as far away from a filler novel as it's possible to get.
Writing: Oh good lord, the writing. Laini Taylor really is one of a kind, isn't she? I don't know any other YA writer who writes so damn beautifully. Every line reads like poetry; this is really, really special writing. I think she's somehow managed to make Days of Blood and Starlight even more lyrical than Daughter of Smoke and Bone, which is a pretty giant feat!
Characters: Karou continues to be the perfect heroine. Gutsy, sensitive, brave, funny - she's got it all. Taylor creates something truly heart-breaking when we see the emotional pain she goes through when mourning the loss of loved ones mixed with the physical pain her newfound 'job' gives her. Seeing a character go to the limits of what they're capable of is quite a difficult thing to read and we see Karou really go through the wringer in Days of Blood and Starlight. There's a scene near the end that really made me wince and Taylor's writing just makes things like this even more powerful - anyone who's read this one should know exactly which scene I'm talking about! Jeez. Brutal but brilliantly executed.

Zuzana and Mik are back and lovely as ever. The perfect supportive friends, these guys would go to the ends of the earth (and beyond) to help Karou. Zuzana is laugh out loud funny and it's these comical moments that help lift the novel and stop it becoming too bleak to enjoy.

As much as I loved some of the characters... I really hated others. In a good way, though. Taylor creates some truly awful villains and I'm not going to talk too much about them as I don't want to get into spoiler territory but man I can't remember the last time I've hated a character so much as a certain someone in Days of Blood and Starlight!

Final thoughts: A breathtaking second installment of a truly special series. Now, what can I do to pass the time while I'm waiting for Dreams of Gods and Monsters to be released?!