She is Not Invisible - Marcus Sedgwick

Summary (from Goodreads): Laureth Peak's father is a writer. For years he's been trying, and failing, to write a novel about coincidence. His wife thinks he's obsessed, Laureth thinks he's on the verge of a breakdown. He's supposed to be doing research in Austria, so when his notebook shows up in New York, Laureth knows something is wrong.
On impulse she steals her mother's credit card and heads for the States, taking her strange little brother Benjamin with her. Reunited with the notebook, they begin to follow clues inside, trying to find their wayward father. Ahead lie challenges and threats, all of which are that much tougher for Laureth than they would be for any other 16-year old. Because Laureth Peak is blind. 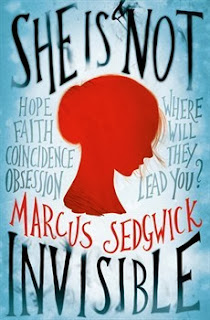 First impressions: This one grabbed my interest straight away purely because of the author. I'm a big Marcus Sedgwick fan so I'm always keen to try his latest release. Once I got over this excitement and read the summary I was even more sold. Throw in the gorgeous cover and this was one of the my most anticipated reads of last year.

Story: The story is a complete winner, isn't it? As always, Sedgwick manages to take a slightly stale concept (YA thriller about a teenager trying to solve the mystery of a loved one's disappearance) and make it overwhelmingly exciting again. The second I read the summary I knew this was going to be something special and truly unique. I haven't read a single YA novel that features a blind protagonist and it puts such an interesting spin on the story - but more on that when I talk about the writing in She is Not Invisible.

Writing: Sedgwick is one of those writers (Laini Taylor is another) where you can take a snapshot of any random page in one of his books and the words will be beautiful. He has such an easy, relaxed turn of phrase, which makes reading his work thoroughly enjoyable and the narrative in She is Not Invisible is gorgeous. The language used is deceptively simple and I've always admired Sedgwick for his ability to tell a meaningful story without needing to lean on overly complex language to try and seem more sophisticated. He is just a classy writer, he doesn't need to patronise his reader to try and prove it.

It was so interesting to read a story from the point of view of a blind protagonist and Sedgwick absolutely does this justice - it's subtly done so doesn't feel like it's been shoe horned in to become an 'issues' novel - our protagonist is blind and that's that, which was definitely refreshing. Reading a whole novel without a visual description of anything, particularly as the setting is New York, really changed the way I look at novels - focusing on the sounds and smells and other senses made for a whole new reading experience and it's an area where I think Sedgwick excelled.

Characters: The characters in She is Not Invisible are just great - my personal favourite being Mr Walker, who really shocked me. When we were first introduced to him I pictured a mean gangster type and what we actually get is something very different indeed!

Our heroine, Laureth, is everything a protagonist should be - likeable, charismatic and engaging. She might make some mistakes along the way ('abducting' her younger brother is definitely questionable) but everything she does is with the best of intentions and her good heart really shines through.

Benjamin (Laureth's younger brother) is very sweet and is often the voice of reason throughout the book - he manages to be innocent and wise beyond his years at the same time. His stuffed toy, a raven called Stan, is a lovely touch and helps breathe life into his character.

Sedgwick does a great thing, which is manage to have two physically absent parents without them being emotionally absent. While the mother and father characters are barely in the novel they still manage to be present within the story and I liked getting to know their characters, despite them having little page time. Family is something Sedgwick does really well here, as we see the different relationships between the characters change and grow as the story progresses, in both positive and negative ways and it's a really balanced view of family life, rather than overly positive or negative, which is what seems to be a new YA cliche (either extremely overbearing parents or those that are never there).

Final thoughts: An exciting, wonderfully told story, She is Not Invisible is Sedgwick at his best. This is a book that will leave you musing your own belief in coincidence and fate long after you've finished reading. And the final paragraph? Fantastic.

Labels: Marcus Sedgwick, Review, She is Not Invisible