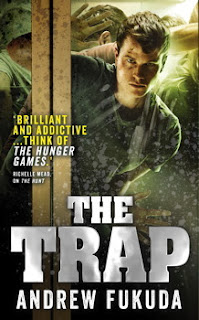 Published: October 24th 2013, Simon & Schuster
Pages: 320 pages, paperback
Series/standalone: This is the third and final instalment in the series
Acquired: Kindly sent for review by the publisher

Summary (from Goodreads): After barely escaping the Mission alive, Gene and Sissy face an impossible task: staying alive long enough to stop an entire world bent on their destruction. Bound on a train heading into the unknown with the surviving Mission girls, Gene, Sissy, David, and Epap must stick together and use everything they have to protect each other and their only hope: the cure that will turn the blood-thirsty creatures around them into humans again. Now that they know how to reverse the virus, Gene and Sissy have one final chance to save those they love and create a better life for themselves. But as they struggle to get there, Gene's mission sets him on a crash course with Ashley June, his first love . . . and his deadliest enemy.

First impressions: I was obviously excited about this one - come on, you know how much I've banged on about the first two books in the series and after the revelations at the end of The Prey I was gagging to read the final installment!

Story: Picking up where The Prey left off, The Trap continues with Gene and Sissy's story as they try to keep themselves and the rest of their group alive against the terrifying vampires. After a brief catch up session we're plunged straight back into the action and the pace doesn't let up for a second, just builds and builds towards an earth-shattering climax that I did NOT see coming.

Writing: Reading one of Andrew Fukuda's books is an exhilirating experience, and an all-encompassing one. I read The Trap in two sittings and, for the second half of the book, was so involved in the story that nothing else existed while I was reading. I was curled up on my bed reading a book, I was racing against time with Gene and Sissy, fighting for survival. And that's all we really want from a book, isn't it? To feel like we're part of the world with the characters. I can't think of many other writers out there who do this as well as Fukuda does. The man is a genius when it comes to action.

The intelligence of Fukuda's writing is apparent throughout the series but the end of The Trap really shows this off. I'm obviously not going to give spoilers but this is one of those wonderful final novels in a series that makes you go back and re-examine the other books that came before it. When I looked back at The Hunt and The Prey I couldn't believe how many little references and hints that had gone over my head but now make total sense.

Characters: Something I've always liked about this series is that the cast is relatively small. With three books coming out over the space of three years it would be easy to forget who everybody is but I haven't had that problem with Fukuda's books, partly because he doesn't introduce too many characters and partly because the characters he does introduce are so memorable. Gene and Sissy are both excellent - determined and smart but flawed in a way that makes them human. It was great to see Ashley June back and I'm a big fan of her character, whether she's a villain or not, I have major hair envy.

Final thoughts: I always know a book has really got into my head when I make my boyfriend listen to me explaining the plot of the entire series and this time he commented that this must be something special if I was still thinking about it so long after reading (FYI, I was still talking about it while we were driving to Tesco to buy our last minute Christmas food the day before Christmas Eve - not that you needed to know that, but still). A triumphant way to end one of my favourite ever series.