Hey everybody! I'm so excited to be part of the blog tour for the latest installment in Darren Shan's Zom-B series. I'm a huge fan of the series, and of Shan's writing as a whole, so it's a massive honour to give you all a sneak peek of the book, which was released on March 27th. 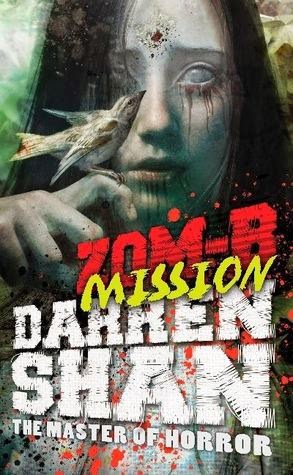 Becky Smith’s father was a bully and a racist. She lived a double life under his reign. For instance her best friend, Vinyl, was black, so she could never talk about him at home. Her favourite teacher, Mr Burke, was of mixed race, so she had to pretend to dislike him.

B never stood up to her abusive father. It was easier to play along and act as if she was racist too. She didn’t think any harm could come of it. Until the day of the zombie uprising. As she was trying to escape from her school, her dad screamed at her to throw a black boy to a pack of advancing zombies to stall them. Accustomed to doing whatever he told her, she obeyed.

Horrified by what she had done, B at last told her father what she truly thought of him and fled. When she was turned into a zombie soon after, part of her was glad. It meant she wouldn’t have to live with her shame and guilt.

But B had been injected with a secret vaccine when she was a child. It gave her the ability to fight the zombie gene and regain her senses. Death was not the end for Miss Smith.

After a spell of captivity in an underground complex run by the army, B escaped and wound her way across London. She found temporary shelter with an artist who lived in an old brewery on Brick Lane. Later she crossed paths with the homicidal clown, Mr Dowling, and Owl Man, a bizarre- looking individual with the largest eyes she had ever seen.

B was eventually offered refuge by Dr Oystein, a century-old zombie who was leading the fight to restore order to the world. He claimed to be a servant of God, given a heavenly mandate to combat the forces of darkness. He had assembled a team of con- scious, revitalised zombies and christened them Angels.

Piqued your interest? Yeah, I thought so. So...what are you waiting for? Off you pop to catch up on this unmissable series.