The Wicked We Have Done - Sarah Harian 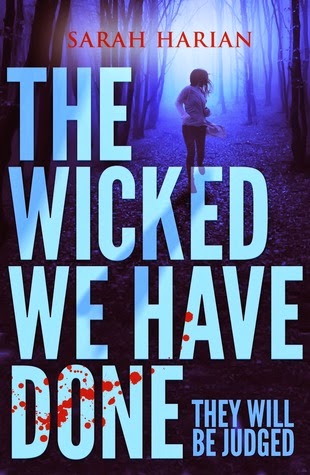 Published: March 18th 2014, Headline
Pages: 272 pages, ebook
Series/standalone: This is book one in the Chaos Theory series
Acquired: Via Netgalley

Summary (from Goodreads): Once a sinner, always a sinner...

Twenty-two-year-old Evalyn Ibarra had taken the normality of her life for granted, until the moment everything changed. Now, convicted of a horrifying crime, she will be one of the first to experience a new kind of punishment.

In the darkness of the Compass Room - an experimental prison - the morality of convicts will be tested, and they will be punished according to their performance. In order to stay alive, Evalyn must relive the events of the fateful day that has brought her here.

Consumed by her own struggle, she never expects to make friends amongst her fellow inmates, let alone fall in love. But in this new and terrifying world, such allegiances are dangerous - because no one will escape unharmed.

Story: So, there are going to be a lot of Hunger Games references in reviews of this one so I'm going to mention it now and get it out the way! There are a couple of similarities between the two stories and they're all linked to the Compass Room, which is like a Hunger Games-style prison, where inmates are tested and judged based on their reactions - those whose brain patterns suggest they aren't 'pure of mind' are killed. In my opinion, though, that's where the similarities end and this is really a unique story.

This technically falls into the category of new adult, rather than young adult, and it was great to see something so different dubbed as new adult. It makes a brilliant change from the whole 'good girl falls for troubled bad boy' cliche and I hope new adult continues to get more and more diverse.

Sorry - I haven't really talked about the story yet, have I?

The Wicked We Have Done ticks along at a nice pace and there is a bit of time to set things up and introduce each character at the beginning of the story - though when the action starts it really starts and I found well and truly gripped from the second third all the way to the end. The resolution at the end of the book is satisfactory and I think this could also work well as a standalone, though I'm excited for the next installment!

I did find the world building a little lacking; I couldn't place whether this was set in the future, or an alternate present and I'd liked to have known a bit more about the background of the Compass Rooms but hopefully that will be explored in the next book.

Writing: Harian's writing is sharp and Evalyn's voice is really well-defined but The Wicked We Have Done is definitely driven by the plot rather than the writing. Because the story is so attention-grabbing it's difficult for the writing to be anything more than a vehicle for the action. That said, the writing is clear, enjoyable and very clean - even though the edition I read was a proof, which is always awesome.

Characters: Harian has created some brilliantly evil characters! I do love reading about a good villain and there are certainly a few to choose from in this book. All of the characters are, of course, very flawed but Harian did a great job at creating flawed characters who managed to be extremely likeable, despite the horrific crimes they have committed.

Labels: Review, Sarah Harian, The Wicked We Have Done