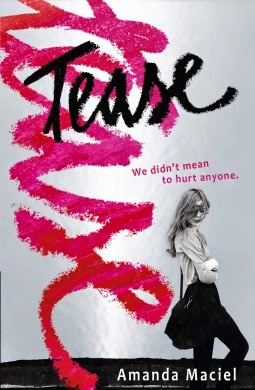 Summary (from Goodreads): A gripping, controversial debut about the nature of bullying.

Emma Putnam is dead, and it's all Sara Wharton's fault.

At least, that's what everyone seems to think when Sara, along with her best friend and three other classmates, has been criminally charged for the bullying and harassment that led to Emma's shocking suicide. But Sara is sure she hasn't done anything wrong, because Emma brought it on herself. Sara is adamant that she was the victim - not Emma.

Inspired by a true story, TEASE is a thought-provoking must-read that will haunt you long after the last page.

My review: The summary for Tease says it's inspired by a true story; I'd wager Tease is based on numerous true stories, rather than one, as the issues in the book are becoming scarily commonplace. Bullying between teenagers that gets out of control and leads to suicide is something I find myself reading about on the news over and over again; it never becomes less shocking and it seems to be getting worse, rather than better.

It was an extremely bold move by Maciel to write about the issues from the point of view of the bully, rather than the victim, but I think it was an exceptionally clever one. We get to hear Sara defend herself and explain her actions, we get to hear about the events that led up to the bullying spree that (maybe, we'll never know) led Emma to take her own life and we get to hear firsthand how a mob mentality can desensitive people to what they are actually doing.

Would the bullying have been so severe if it wasn't a group of them doing it? If it was Sara on her own would she have ambushed Emma in so many different ways, or would she just have had bitchy thoughts in her head but never acted on it? It's an interesting thing that I took away from the book. Do bullies need company; does laughing about it afterwards with friends help ease any guilt that may be present? If it's a group of you do you feel like you're 'all in it together' and get carried away, numb to any repercussions?

There are so many questions that Tease raises and it puts us in these difficult situations without apology. Sara maintains from page one that it isn't her fault Emma committed suicide, that the bullying she subjected her to was not that big of a deal, that Emma brought it on herself by her own actions, that Emma was already ill so suicide was inevitable. And, of course, we never really know what drove Emma to suicide - which is why I think setting the book after her death was such a clever idea.

I really, really enjoyed this book, despite the morbid subject matter. It was a fascinating look at high school life, destructive friendships and personal responsibility. Sara's voice was sharp as a tack, whether she was talking about her love life or the part she played in Emma's death, and I found it impossible to dislike her, whatever her flaws may be. Warming to Sara made me consider Emma's death from all angles and, controversial as it may be, when we saw flashbacks of certain events, it wasn't too difficult to see why Sara took such a strong dislike to Emma. Of course, I'm not suggesting that bullying somebody is the way to go! Though, it wasn't impossible to see why Sara had it in for Emma and, when encouraged by her group of friends, got carried away and took things too far, to a climax that was earth-shattering for every character involved.

Sara, Brielle and the other bullies are definitely not characters you'd want to be friends with. They're selfish, spoiled and cold. But they do feel real. Their actions are awful but they are the cruel, detached type of teenager that we all experienced in some capacity when we were that age. I'm sure lots of reviews out there will criticise Sara's character but, honestly, when was it decided that all protagonists have to be likeable people who are kind and sweet and always make the right decisions? Sara might not be a great person but she feels real which, for me at least, is the most important thing.

Tease might not have you laughing out loud or swooning over the love story, but it will entertain you, it will make you think and it will leave you with questions that you'll find yourself pondering for days after you finish reading. It's a book that you'll want to talk about and it's a book that won't be ignored.