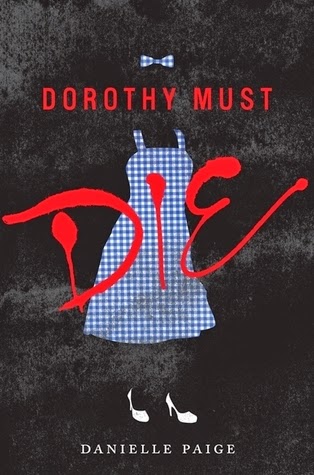 Pages: 432 pages, eBook
Standalone/Series: This is the first book in the Dorothy Must Die series
Acquired: Purchased

Summary (from Goodreads): I didn't ask for any of this. I didn't ask to be some kind of hero.
But when your whole life gets swept up by a tornado—taking you with it—you have no choice but to go along, you know?Sure, I've read the books. I've seen the movies. I know the song about the rainbow and the happy little blue birds. But I never expected Oz to look like this. To be a place where Good Witches can't be trusted, Wicked Witches may just be the good guys, and winged monkeys can be executed for acts of rebellion. There's still the yellow brick road, though—but even that's crumbling.What happened?
Dorothy. They say she found a way to come back to Oz. They say she seized power and the power went to her head. And now no one is safe.

My review: Dorothy Must Die was one of my most-hyped debuts of 2014 and I couldn't wait to get my hands on the eBook! That cover, that summary - it's hard not to get drawn in, isn't it? The Wizard of Oz is such a beloved story that I'm automatically intrigued by anything that's related to it, and Dorothy Must Die was no exception.

When Amy, our heroine, is transported to Oz she discovers her mission is to destroy Dorothy, at all costs. However, it turns out to be a little more complicated than Amy first thought, when it transpires that Dorothy has warped into a powerful, terrifying version of her previous self, surviving on magic mined from Oz's earth.

Oz is such a rich world and it seems as though everybody who writes a Wizard of Oz origin story, sequel or reimagining has fun with the mythology, which is exactly what Paige does throughout this book. We meet the munchkins, follow the yellow brick road and discover the secrets of the winged monkeys, though this time around things are a whole lot darker than they were when Dorothy first visited... and we quickly begin to realise that Dorothy is exactly the reason why Oz has fallen into disrepair. Uh oh.

It was so cool to read the book and wait for the characters I knew to make an appearance, especially when I realised each one was a dark version of who they were in the Wizard of Oz. The Tin Man was particularly terrifying and, man, I am not looking forward to finding out more about the Scarecrow's 'experiments' in book two.

However, aside from the characters we already know, there are a few new faces in Dorothy Must Die and they really hold their own, slotting in nicely to the mythology we're already aware of. Ollie and Gert are my favourite newcomers, so do look out for them when you read this one.

Dorothy Must Die is a rich, visual story and it feels incredibly accomplished for a debut. I'm really, really excited for the second book in the series and I can't wait to follow Paige's writing over the years. A definite thumbs up from me!
Posted by CarlyB at 05:00