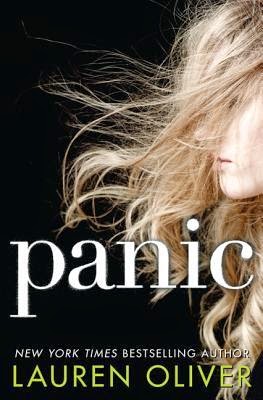 Summary (from Goodreads): Panic began as so many things do in Carp, a dead-end town of 12,000 people in the middle of nowhere: because it was summer, and there was nothing else to do.
Heather never thought she would compete in Panic, a legendary game played by graduating seniors, where the stakes are high and the payoff is even higher. She’d never thought of herself as fearless, the kind of person who would fight to stand out. But when she finds something, and someone, to fight for, she will discover that she is braver than she ever thought.
Dodge has never been afraid of Panic. His secret will fuel him, and get him all the way through the game, he’s sure of it. But what he doesn't know is that he’s not the only one with a secret. Everyone has something to play for.
For Heather and Dodge, the game will bring new alliances, unexpected revelations, and the possibility of first love for each of them—and the knowledge that sometimes the very things we fear are those we need the most.

My review: I think one of the things that impresses me most about Lauren Oliver is how diverse she is as a writer. Everything she lends her hand to is completely different and everything she writes absolutely shines, whether it's young adult or middle grade, series or standalone. Being a good writer is difficult enough but being a good writer across numerous genres and age ranges is staggering. So, a moment of appreciate for Lauren Oliver, please!

The teenagers in Carp are bored, bored, bored. It's a tiny town with nothing going on and summers stretch out endlessly, with no entertainment in sight. Apart from Panic, that is. A dangerous, exhilarating game that is open to all graduating seniors each year, Panic pays out a huge prize to the winner, and this year is the most competitive yet.

Panic is a dual narrative, shared between Heather and Dodge, two competitors who are brought together because of the game but live very different lives. As the story progresses we learn more and more about both Heather and Dodge, their personalities, dreams and motivation. Heather is in it for the money, so she can escape Carp and make a better life for herself and her little sister, and Dodge is in it for revenge, pure and simple.

Panic has a lot going on under the bonnet, so to speak. It's not only about the games and the pressure it puts the competitors under, it's about the competitors themselves, and how all of their lives change over the course of this one summer. We get to know Heather's best friends, Nat and Bishop, who are both important characters, though they don't have their own narrative voice.

The only place where I think Panic suffered ever so slightly is that the scope of the novel is pretty hefty, as it's set over an entire summer, so there are a lot of subplots woven throughout the story. There were so many interesting little stories simmering beneath the surface and I feel a couple of these were skimmed over because of time constraints - particularly Nat's brush with modelling, which was hinted at having a darker side more than once, but unfortunately we didn't really get to find out more, which I was a little disappointed by.

Still, I was gripped by Panic the entire way through and I couldn't wait to find out who the eventual winner would be. I was really pleased by the ending of the story, sure the epilogue was a little cheerful but sometimes it's nice to feel like (most) loose ends have been neatly tied up. Though, in true Lauren Oliver fashion, not everything ended 100% happily, which did give the ending a nice realistic feel.