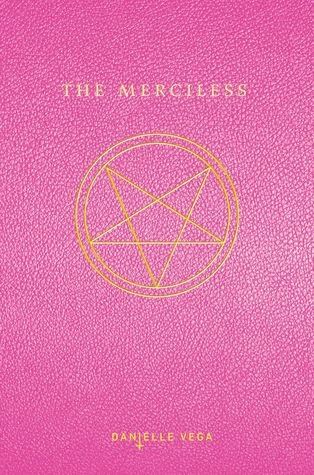 Summary (from Goodreads): Forgive us, Father, for we have sinned
Brooklyn Stevens sits in a pool of her own blood, tied up and gagged. No one outside of these dank basement walls knows she’s here. No one can hear her scream. Sofia Flores knows she shouldn’t have gotten involved. When she befriended Riley, Grace, and Alexis on her first day at school, she admired them, with their perfect hair and their good-girl ways. They said they wanted to save Brooklyn. They wanted to help her. Sofia didn’t realize they believed Brooklyn was possessed. Now, Riley and the girls are performing an exorcism on Brooklyn—but their idea of an exorcism is closer to torture than salvation. All Sofia wants is to get out of this house. But there is no way out. Sofia can’t go against the other girls . . . unless she wants to be next. . . . In this chilling debut, Danielle Vega delivers blood-curdling suspense and terror on every page. By the shockingly twisted end, readers will be faced with the most haunting question of all: Is there evil in all of us?

My review: Seriously, you guys, I cannot explain the love I have for this book! The second I saw the cover on Goodreads I was intrigued, then when I read the summary it shot straight to the top of my wishlist and I've been counting down the days!

Sofia is the new girl at school and keen to make a few friends, so jumps at the chance to sit with popular good-girls, Riley, Grace and Alexis. It's clear from the outset that the girls are strong Catholics but it's not until the novel takes a mad descent into darkness that we realise quite how dedicated they are to what they believe in...

As a Catholic school survivor I thought I knew what I was in for, a bit of guilt and judging and the like. Yeah, I was just a little bit wide of the mark. This isn't a story for the light-hearted, by any stretch of the imagination. I like to think of myself as a well-seasoned horror fan but nothing makes me happier than something that can genuinely unsettle me - boy oh boy, did The Merciless unsettle me!

I read it in a single sitting and haven't stopped thinking about it since. I forced my boyfriend to sit and listen to all of my 'omggg so good' squealing, which is always a sign that I loved a book. I could picture every single horrific scene so vividly and I have to highlight that this is a debut novel, which makes it feel even more accomplished. Danielle Vega is right at the top of my 'ones to watch' list, for sure.

The Merciless just reinforced my fear of mob mentality, as it's the girls who fuel the fire, spurring each other on and making everything descend into madness. I feel like if it had just been one on one, the novel never ever would have panned out in the same way. It's scary what a crowd can do when they start to lose their grip on reality.

It's difficult to review this without giving too much away, so I'm not going to talk too much about the plot. Everything you need to know is in the summary, so don't go digging for more information before you read it - just pick up a copy and enjoy the ride. Oh, and isn't that one of the most gorgeous covers of 2014? Pretty and evil all in one - I love it.

I know a lot of you who read this blog aren't horror fans but if you're going to give one creepy novel a chance this year, please make it The Merciless. I read a lot of horror and there aren't many that have got to me the way this has, especially not YA.

The Merciless is a deliciously dark story that you won't be able to resist, or stop thinking about.
Posted by CarlyB at 05:00