So we're onto day two of the YALC Readathon - how did you all find day one? I only had one book planned and that was Half Bad by Sally Green - I raced through it and absolutely loved it. Today I'm planning on reading two books...so keep your fingers crossed for me!

I've got a guest post today from Lucy Saxon, whose debut novel, Take Back the Skies, is one of the most-hyped books of 2014...and it's actually on my reading for this week! Without further ado, I'll hand you over to Lucy, who's here to talk about her top book, film, TV and Youtube picks: 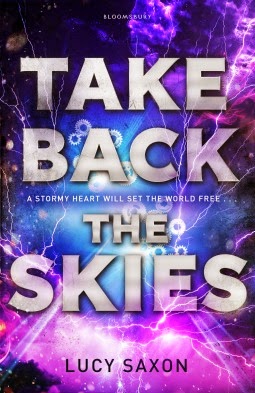 So, I’ll be honest, with the amount of time I’ve spent working on cosplay recently I’m very behind on my TV and books. But I’m working to change that in the next month, and take some time to catch up on everything. So here’s a short list of some of the things I’m obsessed with that I’m going to be treating myself to in the next few weeks!

Books
City of Heavenly Fire – Cassandra Clare. I’ve been waiting for this book for SO LONG, and I grabbed a copy at the book launch that’s been sat on my bookshelf taunting me ever since. I don’t think I’m emotionally prepared for it, but I’m going to read the series right through from City of Bones and hope it doesn’t completely destroy me. Thank the Angel we have The Dark Artifices to look forward to!

Heir of Fire – Sarah J Maas. I was lucky enough to be sent over a proof copy by Bloomsbury, so that’s another one I’ve been wanting to read for a while. I’m so very, very excited about this; I’ve heard nothing but amazing things about it from everyone at Bloomsbury, and it sounds like it’s going to be epic. Plus, it’s huge! That can only mean excellent things.

Other than that, I just have the large stack of books by YALC authors that I have yet to read; some I already own, some on my wishlist. I’m going to be reading a lot this month!

Film
Captain America: The Winter Soldier – Anyone who follows my Tumblr will know how big a fan I am of Captain America. And not just because of Chris Evans’ face. Hooked right from The First Avenger, I spent a lot of time waiting for Winter Soldier and it didn’t disappoint. It’s probably my favourite MCU film so far! I need it to be out on DVD so I can watch it 30000 times in a row.

The Fault In Our Stars – This film comes out in the UK on the 20th and I can’t wait to see it! I loved the book so much, and everything has been so so positive about the movie that I know it’s going to be amazing. But first I need to find a friend to go with me so I don’t end up sat sobbing in a cinema on my own. Misery loves company!

TV
Teen Wolf – I got as far as S3 Ep7 before cosplay madness took over, and I am DESPERATE to finish series 3. Teen Wolf was one of those things that I was pretty late to the party with, but it was allll over my Tumblr dash and that got me curious. It’s a show that you think is going to be your typical trashy supernatural teen romance series thing and be really lame and cheesy, but it’s actually ridiculously awesome. Plus, the cast are amazing.

Adventure Time – I’m about 20 episodes behind on Adventure Time and that physically pains me to admit. I probably don’t need to gush about the awesomeness of Adventure Time; everyone already knows, right? Basically, if you haven’t started watching yet, do that now. And if you’re sat watching the first season thinking ‘this makes no sense whatsoever’ keep watching, eventually you forget to care.

Music
All Time Low – I am ridiculously in love with All Time Low’s ‘Dirty Work’ at the moment. I love all of their albums, but Dirty Work has just hit all the right buttons for me, so I’ll probably listen to it about 300 times in the next month.

Keith Urban – Fun fact about me; I have a deep, deep love for country music. Born from many long car journeys between Texas, Oklahoma and Arkansas when on holiday visiting friends, my iTunes is approximately 60% country music at this point. It’s not just Keith that I’m listening to right now, but the sunnier it gets the more often I find myself blasting ‘Long Hot Summer’ at highest possible volume while making cosplays.

Youtube
Sci-Show – One of the many Vlogbrothers-related channels I need to catch up on. I think the only thing on Youtube I’ve been keeping up with recently is Hank Green Plays Pikmin 3, and that’s because it’s hilarious. So I have a lot of science to watch!

Geek And Sundry – Again, something with a lot of different shows I need to catch up on all on the same channel. I don’t watch all of the stuff on G&S, but there’s enough for it to be on this list!

That’s about it on the main things I love and need to get up to date on! There are of course plenty more things on the list, but I’d be here all month if I listed them all. And yet I still predict most of my free time over the next 6 months will be spent making cosplays and on Tumblr instead of actually working to make this list shorter. Such is life!

Thanks so much for stopping by, Lucy! And that's really reminded me that I definitely need to start watching Adventure Time to see what all the fuss is about...